Construction of 463 rental apartments in Langa could commence in October as part of the first phase of the City’s Hostel Transformation Programme. This project will positively affect the lives of thousands in this impoverished area of Cape Town. 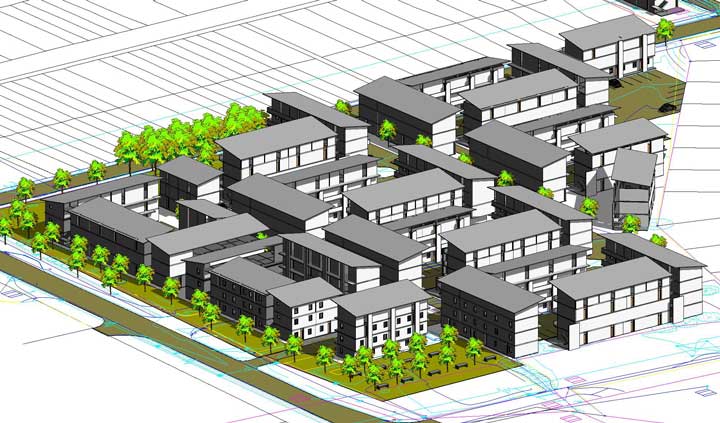 Aerial perspective of the envisioned Langa-units and basic plan layout

The first 463 apartments will be built over the next two years with the remaining 837 units provisionally planned for completion within the next five years.

It is envisioned that 1 300 families, or approximately 5 200 people, will be relocated from Apartheid-era hostels to secure two-bedroomed apartments in Langa – with individual kitchenettes, toilets, showers and solar-heated water systems, wash-lines and space for children to play safely in the grounds.

The first beneficiaries who will be identified are existing hostel tenants in “New Flats” and “Special Quarters”. Current residents of Siyahlala informal settlement are also earmarked project beneficiaries. The newly-established Project Steering Committee will assist in the identification and verification of beneficiaries.

The City’s overall Hostel Transformation Programme consists of an estimated 15 000 units that will eventually be built in Langa, Gugulethu and Nyanga.

“This programme will provide apartments for families who have been living in the appalling conditions prevailing in the hostels of Langa, Gugulethu and Nyanga for the past 40 years. As part of our endeavours to create a Caring and Safe City, this project will see families move from the indignity of their present living conditions inherited from our Apartheid past,” said the City’s Mayoral Committee Member for Human Settlements, Councillor Tandeka Gqada.

In line with the City’s densification policy – designed to maximise the efficiency of services for existing infrastructure – the apartments will be developed in three- and four-storey blocks.

The roll-out of the Programme depends on the acquisition of sufficient land and a consistent stream of funding. R170 million has been made available for the construction of the first units in Langa. It is estimated the entire programme, comprising 15 000 units, will cost approximately R5,6 billion (excluding the cost of the land).

The National Treasury annually allocates funds for the provision of housing to the City. The allocation is applied to the various housing programmes that the City manages, including this project in Langa. Each programme in turn is managed according to the prescripts of the National Department of Human Settlements.

The Project Management Team was appointed in January 2009. It was tasked with collating data on the hostels within the City’s jurisdiction and investigating the condition of the hostels. Furthermore, it looked at ways to secure the required land for the programme. It was also responsible for the design of the first phase of the 463 units.

After years of public participation, a meeting was held on 15 August 2013 between the City and representatives of the communities in Langa. Representatives of the once disparate communities endorsed the Terms of Reference for a Project Steering Committee tasked with developing a stakeholder communication and engagement framework to ensure the success of this major development project.

Under the Apartheid regime, the hostels provided accommodation in single-gender dormitories for migrant labourers who possessed “bed cards” – this allowed them to occupy a bed in a hostel room. Since the repeal of the influx control legislation and the advent of democracy many “bed card holders” have naturally been joined by their families seeking a better life in the city. This led to extreme overcrowding and the inevitable deterioration of the levels of service in sanitation, ablution and social space available in the hostel precincts.