The R60 million price tag for a penthouse apartment in Morningside that has recently been placed on the market through Pam Golding Properties (PGP) is certainly remarkable, but the property is a “Sandton gem the likes of which has never been seen in Gauteng before”, says PGP Hyde Park joint area manager Jonathan Davies. 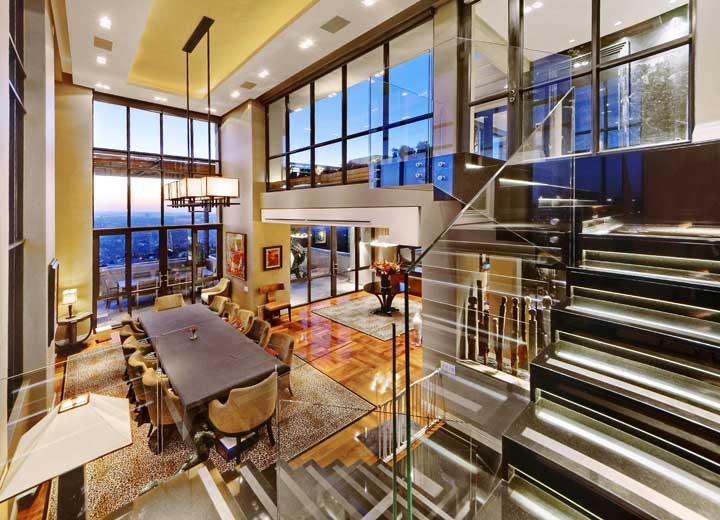 This Morningside penthouse is on the market for R60 million through Pam Golding Properties.

According to Davies, the property, which is situated in the Regent building in Morningside, is the highest- priced apartment ever to go on the market in Gauteng. The property has a total size of some 585 sqm, which gives it a price tag of a little more than R100 000 per square metre. Davies says that in 2009 a property in Sandton fetched R35 million, the highest price an apartment in the area has fetched so far.

He points out that the Morningside penthouse has many superb features and is confident that it will generate considerable interest in both the local and international markets. “It is a large property with incomparable fittings and facilities,” he adds. “It offers magnificent panoramic views of Johannesburg and the very finest in South African urban living. If that is not enough it is situated virtually in the Sandton CBD, the financial and shopping hub of South Africa, where the demand for upmarket residential properties is currently at an all-time high.”

Wayne Venter, a PGP agent and Sandton area expert, says that the property is likely to attract the interest of foreigners. “The apartment is on sale for the equivalent of approximately £4million, which is well within the reach of the world’s wealthy,” observes Venter. “That said, a buyer could also emerge locally – perhaps a top executive who wants a luxurious lifestyle, but who appreciates Sandton’s centrality. It is going to be very interesting to see who fits with this one of a kind penthouse.”

The flight of many businesses from the Johannesburg central business district, including the Johannesburg Stock Exchange, in the 1990s saw Sandton become the new financial district of South Africa. It has gone from strength to strength since then and today the area is home to large numbers of commercial and professional businesses. This has only served to stimulate the residential property market both within and around Sandton.

Venter affirms that the residential property market in the Sandton area is still strong and high-end high-rise properties in the CBD are proving particularly popular. “A number of executive apartment blocks such as Regent and the Michelangelo Towers have been developed in the Sandton CBD in recent years as everyone tries to be where the action is. Sandton is growing rapidly and it is also growing skywards,” he observes.

Venter says that the features of the apartment, which was initially built as two separate penthouses and was later merged into one, have to be seen to be believed. “There are four palatial bedrooms, three of which have their own balconies. The generous rooms have electric blinds, plush carpets and en-suite bathrooms decked out in marble. The apartment has no fewer than six bathrooms.”

PGP Hyde Park joint area manager Rupert Finnemore notes that the penthouse, which is being sold fully furnished, is an entertainer’s dream: “There is a rooftop cocktail bar, as well as a heated swimming pool, steam room, complemented by a bespoke refrigerated walk-in wine cellar. For the wine connoisseur who enjoys optimum convenience there a double garage in the basement that has been converted into a second refrigerated wine cellar. Meanwhile, the kitchen, which is fully fitted out with exclusive Gaggenau appliances, is a joy to behold.”

“For the tech savvy this apartment literally has it all with a state-of-the-art home theatre and Apple TV complete with on-wall touch screen control or iPad/iPhone remote control, and multi-room audio. Centralised climate and humidification ensure absolute comfort while broadband Internet, WiFi and IP phones ensure that everyone stays connected.”

A total of seven garages allow for a veritable fleet of cars and ample garaging for friends and family. A large staff room and two laundries form part of the apartment, which is fitted with a high-end security system, access control and CCTV system.

Those who choose to do so need never even leave the apartment as a concierge service is on tap at the Regent, which has its own café, restaurant, health spa, sophisticated gym as well as indoor and outdoor pools.

“This penthouse is a work of art that offers luxurious living in one of Africa’s fastest growing cities,” notes Finnemore. “We are confident that it will attract a great deal of interest and that the property will be well received by the marketplace,” he concludes.