The economy of the Klein Karoo relies primarily on agriculture with tourism its secondary source of income. Since the 1880’s and the early 20th century’s feather boom, Oudtshoorn and its surrounding areas have always been known for its ostrich farms, says Jacques de Beer, Pam Golding Properties (PGP) area principal in the Klein Karoo. 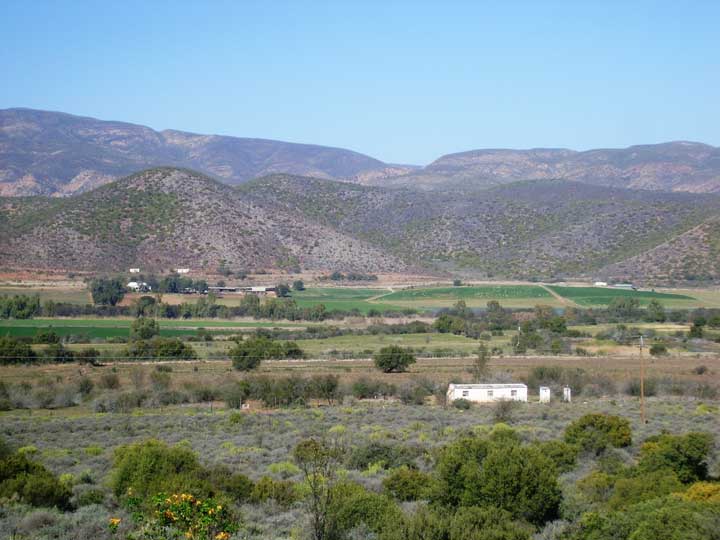 Located in De Rust near Oudtshoorn this lifestyle farm of 17.6ha, with a four bedroom, four bathroom home, is priced at R1.42 million through Pam Golding Properties

“It is understandable that, with the outbreak of the highly pathogenic H5N1 strain (Bird-flu) in Oudtshoorn during 2011, our Klein Karoo economy was exposed. The European Union (EU) placed an export ban on South African’s ostrich meat. Thousands of ostriches had to be slaughtered, however, not with everyone’s approval. The world famous ostrich show farm, Highgate, also had to close its doors due to all their ostriches being slaughtered. The EU ban remains in place and has accounted for more than 50 percent of ostrich farmers leaving the former R2 billion a year industry. Before the ban, the Klein Karoo region was producing about 170 000 slaughter birds a year, which represented about 70 percent of ostrich meat consumption worldwide, most of it destined for the EU,” says de Beer.

He says there is a well-known Afrikaans expression: “’n Boer maak ‘n plan!” and although water is scarce in the semi-arid Klein Karoo, it is a fertile farming area. “Since the bird-flu outbreak we’ve seen the tenacity of our farmers and their ability to adapt come to the fore. Diversification has been the slogan through these challenging times and we have noticed farmers increasing their sheep share of the farm where possible. Some have introduced cattle, boerbok and even Springbok.

“Farmers with access to irrigation have introduced lucerne or increased their lucerne productions substantially. Some farmers are returning to tobacco farming and a substantial number of farmers are now producing vegetable seed. Some big ostrich farmers have negotiated profitable lucerne deals with horse farmers throughout the Cape region. Ostrich farmers have also transformed most of their conventional ostrich business to exporting cooked ostrich meat. Worldwide ostrich feather prices have also risen and fortunately this avenue subsidises some loss on other ostrich exports.”

De Beer says unfortunately, some of the smaller ostrich farmers had to sell out to the bigger players. “We still have many ostrich breeding farms throughout the Klein Karoo, but have also noticed ostrich farmers flourishing in the Swellendam and Riversdale areas. Farms vary in size. Smaller farms from 500ha to 1000ha are viable only if the farms have at least 10 percent of its size producing lucerne under irrigation and the rest veld. The older traditional big ostrich farmers still manage farms of over 5000ha.

“We have also seen ostrich and other farms come onto the market at reasonable prices. Some of them had ostriches, but can now be converted to lucerne producing farms, livestock or lifestyle farms. We have experienced a sudden increase in demand for large game farms or large farms with enough ‘veld’ to be converted into game farms. These buyers are from upcountry, from those looking to buy farms to breed buffalo and other scarce game species,” he says.

Pam Golding Properties Klein Karoo currently has a 16 000ha farm with enough water and well equipped for sale at R62 million. Says de Beer: “We also have three exceptional game farms for sale ranging between 3500ha and 8000ha and priced from R14 million. Throughout the Klein Karoo smaller farms between 6ha and 200ha are being acquired for less than R2 million as lifestyle farms, some with spectacular views over the Swartberg and Outeniqua Mountains and other situated in idyllic settings. These farms are popular because they are generally easily accessible and close to a town and therefore schools and other amenities. The Klein Karoo’s number one draw card is still the quality of life with clean air, pure water, a low crime rate, quality schools and simple life.”

Sales in the marketplace in general include a 100ha eco-farm acquired for R2.2 million by a buyer from George, as well as a few guest smallholding transactions in the area, including an 11ha guest smallholding sold by PGP for R690 000. De Beer says notably, PGP is receiving more enquiries on big commercial farms than in the last five years. These farms vary in size from 2500ha to 4500ha and are priced from R4.6 million to R17 million.

“During 2013 we have experienced a huge demand for residential rental property. We have had a tremendous inflow of military and police personnel in Oudtshoorn, some of whom are not catered for by the army barracks or police quarters. The International Flight Training Academy has also brought in 50 more new trainee pilots from China to be trained at the Oudtshoorn Airport, all of whom require accommodation.

“Over and above this, quite a few outlying (Great Karoo and Eastern Cape) farmers have decided to relocate their children to good boarding schools in Oudtshoorn and have therefor decided to buy or rent a house in town so that they can visit them on weekends. We are also finding that some newcomers from Polokwane, Mpumalanga and North West prefer to rent first and then look for their ideal home.”

De Beer says the average rental costs in Oudtshoorn have steadied at between R1600 and R5500 per month. “We are currently letting centrally well maintained bachelor flats to mostly public sector personnel at rentals from R1600, while a four bedroom home in the best neighbourhood will fetch from R5500. PGP Oudtshoorn has just sold a three bedroom property for R350 000 with a rental income of R3300. These opportunities are beginning to arise again in the market and one needs to be close to the market to snap them up. Currently, we have a commercial property achieving a monthly rental of R22 000, available for purchase at an asking price of R2.4 million. We also have a centrally situated sandstone building with two low risk tenants paying a total of R9950 per month with an asking price of R1.4 million.”

For further information contact Jacques de Beer of Pam Golding Properties in Oudtshoorn on 044 272 2822 or 082 897 8262 or email Jacques.debeer@pamgolding.co.za.