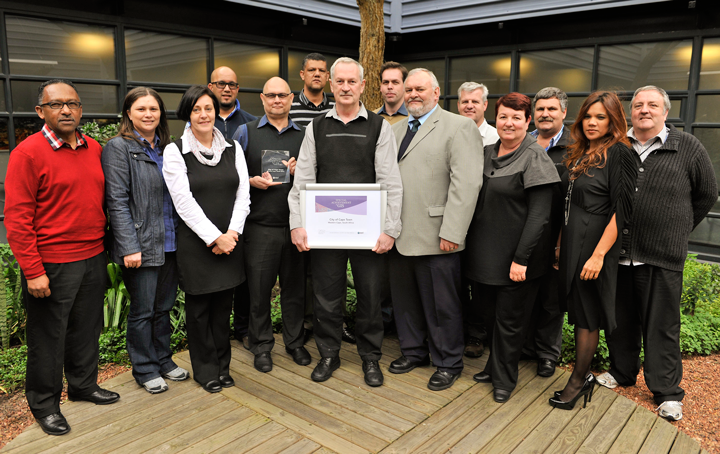 This international award is given to recognize outstanding use of GIS technology. The City of Cape Town’s Integrated Spatial Information System stood out from more than 100,000 other projects submitted by GIS specialists around the globe.

The City’s ISIS system is a world class Integrated Property Information System, designed to help the City better manage a wide range of property related business processes. ISIS provides a single view of properties, both spatial and financial, By combining these views ISIS increases accuracy, reduces red tape and speeds up these processes, saving the city and ratepayer’s time and money.

Previously, separate systems were used to capture, store, maintain and manage property related information, separately. This resulted in incomplete information, data inconsistency, delays in capturing and making data available and delayed handovers between departments. ISIS now offers one single view of a property (both financially and spatially) with all its attributes (for example ownership) which is accessible by City staff. Updates are now synchronised, improving co-ordination between City departments such as Valuations, Revenue, Planning and Building Development Management, Property Management and Housing as well as the Deeds Office, Surveyor General and conveyance attorneys.

Through the integration of the transaction system with the Geographic Information System (GIS), all the City’s transactions related to properties are also geographically displayed, making it possible to do spatial analyses of transactions, which will enhance analysis of trends. In a later phase of the project, a web portal will also be created to serve information to the public.

The C3 Notification ISIS Viewer allows users to zoom in to a specific geographic area and view the all service delivery notifications which are reported to the City via the Customer Relations Call. This allows the city to more accurately prioritise service delivery resources and target infrastructure maintenance.

The single spatial and financial view of properties, which is provided by the ISIS system, is a major step forward in ensuring that Cape Town is a Smart City and has now been recognised internationally.

In nominating the city of Cape Town for the award, ESRI noted:

“The City of Cape Town has been using ESRI technology for that last 20 years for planning and visualization purposes. In 2008 they embarked on a project to consolidate all their property data into a single geo-enabled ERP System. This project is known as the ISIS (Integrated Spatial Information System) project. The goals of the project included:

As part of the project property data from various departments were consolidated into the LUM (Land Use Management) module of SAP with GIS as one of the main feeder systems for property data. SAP LUM brings together all the aspects of property and ownership. The ESRI GIS system was used to store the spatial aspects of the properties. Both systems were integrated using message-based integration using a mediator pattern. In this way, both the spatial and ERP data are kept in a single integrated logical database. Properties are captured in the GIS first before they are sent on to the LUM system to ensure that all properties have a spatial representation.

Data is made available to City staff via a SAP GUI with an integrated Web mapping application and number of Web Mapping Applications for search and visualization.”

“This is a significant achievement for the City of Cape Town, proving that not only do we employ some of the brightest minds in the GIS industry, but that, by developing smart technologies such as this, we demonstrate our commitment to creating an efficient and enabling environment which benefits both our residents and the City,” said Alderman Demetri Qually, Mayoral Committee Member for Corporate Services.