The new super-regional Mall of Africa will be the heart of the ambitious Waterfall, a city superbly situated between Johannesburg and Pretoria, and developed on a scale beyond anything South Africa has known. With its development, leading South African property developer and investor Atterbury is raising the bar for retail centres on the continent.

Atterbury Property Developments MD James Ehlers says: “Developing a mall in the heart of the fastest growing urban node in Africa created the prospect for an exciting modern landmark. Mall of Africa’s sheer scale, distinctive design, exceptional location and top-notch retail mix puts it at the forefront of retail developments”.

With the first free-flow intersection of its size in Africa at the nearby Allandale Road exit from the N1 Highway, getting to Mall of Africa is easy. Massive road upgrades also ensure easy access. Besides road transport, it is minutes away from the Gautrain Midrand Station and enjoys superb proximity to OR Tambo International Airport, Midrand’s Grand Central Airport and Lanseria International Airport.

Earthworks for Mall of Africa began in October 2012. It is due to commence trading in the first half of 2016.

The highlight of Atterbury’s development is the exciting 800,000sqm mixed-use Waterfall City at the heart of Waterfall and, at its nucleus, is the Mall of Africa. The mall holds prime position in the tailor-made 330ha new city that embraces integrated living in its fullest live-work-shop-eat-play scope, with retail, offices, homes, hotels, a hospital, light industry and the all-important lifestyle and leisure components.

“Mall of Africa will be a visual, social and economic anchor within Waterfall City,” says Ehlers.

Over 300 shops, with seven anchor tenants and a carefully considered retail mix, will create a unique retail experience at Mall of Africa. It will provide a well-balanced variety of local and international brands, services, speciality shopping, entertainment and eateries. Flagship stores for all major South African retailers will be part of its attraction.

According to Cobus van Heerden, retail director, Atterbury Property Developments, international retailers are targeted, many of whom are not yet represented in South Africa. These range from luxury brands to the more mainstream. The response from them has been phenomenal and this will further differentiate this mall from current South African malls.

Its two levels of exceptional shopping will be matched by a two-level basement parkade.

Ehlers explains a mall of this scope suits the large, growing community living and working in and around Waterfall.

Most of this market comprises economically influential consumers – largely from the LSM 7 to 10 brackets. This puts Mall of Africa on the doorstep of many of South Africa top earners, executives, professionals and young entrepreneurs. Besides local shoppers, Ehlers notes the vibrant mall will also entice visitors to the city from South Africa, Africa and further afield.

Mall of Africa combines the latest international trends and environmentally sustainable materials and technologies. Its design is informed by the New Urbanism principles of walkable, mixed-use environments to create a truly cutting-edge shopping centre.

“Waterfall strives to promote an integrated, eco-friendly environment which provides good quality of life. At the epicentre of this energised precinct, Mall of Africa is a beacon celebrating connected living,” says Ehlers.

Mall of Africa’s architectural form is inspired by the geological beauty of Africa, fitting for the jewel in Waterfall’s crown.

It reflects this splendour using wood, stone, glass, concrete and other natural materials. The mall’s centre court takes inspiration from the forests of central Africa. Its other four courts reflect the four points of the compass on the African continent: the great lakes in the east, the oil and trade of the west, the sand of the north African desert and the mineral wealth of southern Africa.

“Mall of Africa sets a new benchmark in mixed-use shopping and entertainment. It forms an anchor around which a vibrant new city, with a modern new urban framework, will grow,” says Ehlers. 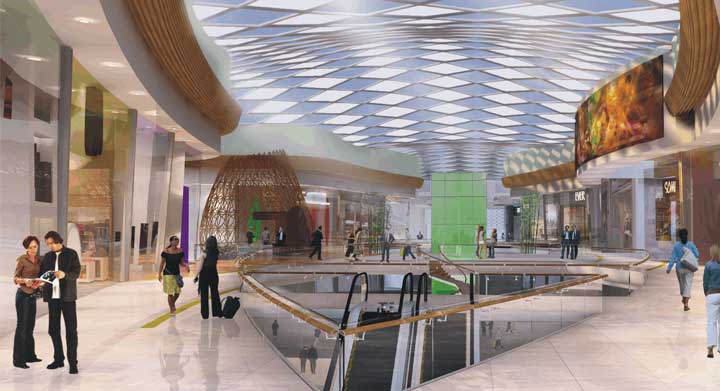 Leading SA property fund Atterbury Investment Holdings (AIH) is the major investor in Waterfall Business Estate, including the iconic mall, with an 80% stake. “Mall of Africa is expected to contribute positively to AIH’s sustainable growth and performance,” says Morne Wilken, CEO of AIH.

According to Ken Reynolds, Gauteng Regional Executive for Nedbank Corporate Property Finance, the successful conclusion of the finance deal, which is the highest ever concluded by Nedbank, came on the back of a comprehensive tender process and demonstrates the high levels of confidence that participants in the South African property industry have in Nedbank Corporate Property Finance’s reputation as a market leader.

“Nedbank Corporate Property Finance prides itself in providing agile solutions that enable opportunities for our clients, which has resulted in our market-leading position today.

“In addition, Nedbank and Atterbury have developed a solid business relationship over the years, and we are proud of our role in enabling our client’s vision for the Waterfall precinct. Our relationship is built on mutual trust and respect, an understanding of each others’ business models, and a shared vision of the potential that South Africa’s commercial, industrial and retail property developments have, which significantly contributes to the economic and social development of the country as a whole,” says Reynolds.