Two Bonnievale farms with a total of some 60 ha of land brought to the market only ten weeks ago by Rawson Auctions, Western Cape, have been sold pre auction to a single buyer for a price of just on R6 million, which, said Rawson Auctions co-franchisee for the Western Cape, Tanya Jovanovski, was close to the reserve price established.

The good news, she added, is that the buyer, Herr Heinz Sieg, Chairman of the KMP Group, intends not only to keep the farms in operation but to develop them further for additional fruit production, which may take them into new lines.

The two farms, Holland and Oudekraal, both have dams and ample water supplies from local irrigation schemes and already have some 12 ha of cultivated and irrigated land on them, where nectarines, plums, figs and apricots are grown. These products will now be delivered to KMP’s factory in Philippi, where they will be washed, chopped, sliced and packed to supply large South African and international supermarket chains.

The acquisition of the farms, said Herr Sieg, fits in the KMP’s diversification expansion plan, which includes the establishment of further work bases in South Africa. The group, whose primary activity is the manufacturing of computer printing supplies such as laser and inkjet cartridges as well as dot matrix and thermal transfer ribbons, already has bases in Johannesburg, Durban and Cape Town. 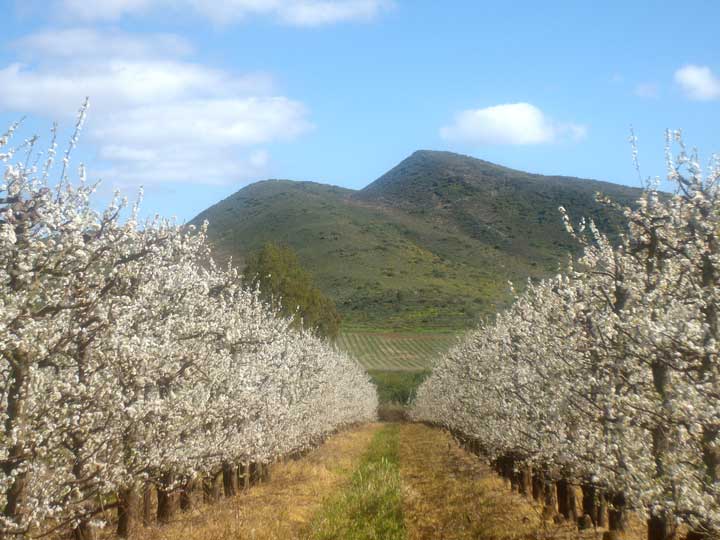 View of the attractive Oudekraal farm.

Jovanovski said that she found it particularly encouraging that Herr Sieg has sufficient investment confidence in South Africa and continues to expand his businesses here.

KMP was, in fact, established in Germany by Herr Sieg 25 years ago. He was 45 years old then and had been Managing Director of a print supply company. Leaving this, he established his own group, KMP, which now operates in eight European countries, has an annual turnover of R900 million and employs close on 700 people.

Herr Sieg first came to and invested in South Africa 20 years ago and, although he is based in Germany, continues to visit regularly. He has a home in Simon’s Town and is deeply involved with the Kromboom Rotary Club, through whom his company donated two complete sets of gymnasium equipment for hospitals in Milnerton and Retreat.