There are now just three plots left for sale at “Brandwacht aan Rivier” – and Pam Golding Properties (PGP) anticipates they will not be on the market for long. The secure lifestyle development is located on the mountain-side of the R44 linking Stellenbosch and Somerset West, on the banks of the Brandwacht stream. Residents enjoy a secure country lifestyle with superb mountain views and extensive green areas, including river-side walkways, parks and beautiful gardens. 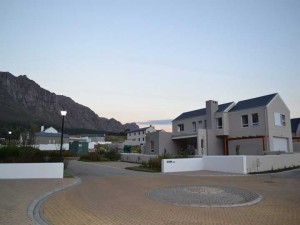 Just three plots are still available for purchase, sized between 765sqm and 893sqm, and all priced at R2.5 million.

PGP’s manager for the project, Louise Varga, says the development’s initial launch to market in late 2010 saw 80 percent of the 120 erven sold within the first three weeks. The first transfers occurred about a year later, and the estate has since seen a number of re-sales, with very healthy return on investment. “Twenty-six of the erven have been re-sold since transfers occurred in November 2011,” she says, “and PGP concluded nine re-sales in April/May 2013 alone. Re-sale prices have shown exceptional growth of between 30 and 40 percent – some plots which were initially bought for R995 000, for example, have sold at R1.4 million. By far the majority of the re-sales have been to local buyers from Stellenbosch and Somerset West, purchasing to live on the estate.”

The final three plots are sized between 765sqm and 893sqm, and are all priced at R2.5 million.

“Brandwacht aan Rivier” is developing fast, with nine homes already complete and occupied, and a further 34 owners currently in the process of building. PGP agent Diana van Graan says the existing residents are already making the most of the lifestyle, with parents enjoying evening strolls along the waterside while their children play in the parks and ride their bicycles on the streets. Twenty-four hour manned security is in place, while an electric fence secures the perimeter of the estate. The gardens are also fully established, and a series of owl boxes has been placed at strategic intervals along the riverside walkway, to attract these night-time visitors. “It is clear that the tranquil, safe environment promised by the developers has become a reality,” says van Graan. “Residents have a quick and easy drive into Stellenbosch for work, shopping and medical care; while top schools like Rhenish, Paul Roos and Eikestad Laerskool are just a few minutes away. At the end of the day, owners can return to a pristine and peaceful country setting where they can relax and leave the pressures of the workday behind them.”

To view the remaining erven, or for more information on “Brandwacht aan Rivier”, contact PGP agent Diana van Graan on 021 887 1017, 082 569 2429 ordiana.vangraan@pamgolding.co.za. You can also visit the PGP website at www.pamgolding.co.za/brandwacht.