Game farming and game farm land is coming of age, and proving to be a increasingly important factor in the farming sector in general in South Africa, says Wayne Rubidge, manager for the Karoo region for Pam Golding Properties. 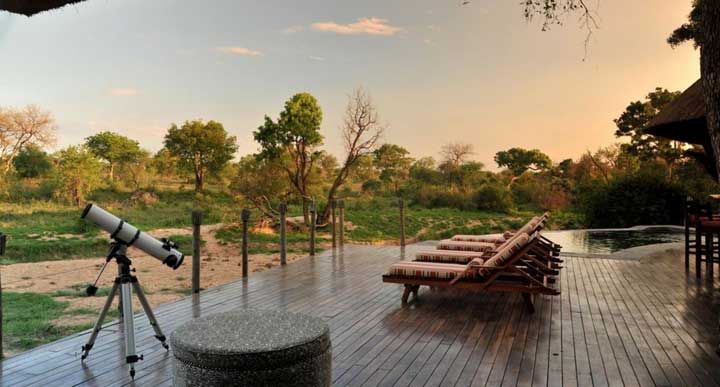 This 5-Star luxury safari lodge with 10 luxury chalets and unobstructed views over the bushveld and big game is situated in one of the concession areas with an open fence policy to the Kruger National Park. Marketed by Pam Golding Properties this property is priced at R62 million.

“If you consider the rare game breeding component of game farming, over the past five years the overall turnover of game auctions conducted by just one auction house alone has increased by 485 percent while growth in sales turnover for the top five rare game species has been 49 percent year on year. At the same time, from a tourism and economic perspective South Africa has also benefited, with significant current and potential contributions through game farming and its extended value chain both upstream and downstream,” he says.

Rubidge says the list is long and impressive as the economic contribution of the value chain is approaching R10 billion per annum and growing, while enabling the productive utilisation of millions of hectares of formerly marginal land. Foreign exchange earnings through related eco-tourism and hunting safaris offer considerable opportunities, and there is also major potential to offer a real solution to the challenge of food security for a growing population. Game farming also has the ability to create relatively high quality jobs, particularly in rural areas.

“Of key importance is that game farming facilitates the conservation not only of Africa’s rare game species, natural habitats and eco-systems, but also our unique heritage as South Africans. It is a core source to repopulate the rest of Africa with rare species that have been exterminated through habitat loss, poaching and hunting.

“The diversity of the game and wildlife industry is now entrenched and offers many choices for the investor. The variety or combination of choices range from a Big 5 Safari Reserve, big game hunting reserve, rare game breeding reserve and wildlife reserve to a private game reserve, game farm, and lifestyle reserve or nature farm,” says Rubidge.

Prices of land vary substantially and depend on many factors such as rainfall, carrying capacity, vegetation, improvements (eg watering points, handling facilities, roads and internal fencing) and area or location. In the Kruger National Park concession areas the price of land with 5 Star lodges and traversing rights ranges from R30 000 per hectare to around R80 000 per hectare, and in some instances even more. In the traditional game ranching areas in Limpopo prices range from R8000 per hectare to as much as R20 000 a hectare, depending on the improvements and the value of the game.

Rubidge says when considering the options two scenarios exist. The land or area is first identified and then the best land use for the property is considered. If the investor has a specific land use in mind he or she then seeks out the best land for the intended use. Budget is the final consideration.

“Prior to 2009 there were a large number of marginal farming properties that experienced a change in land usage, but this trend has slowed and in some places reversed in instances where game fenced land is now again stocked with a mixture of game and cattle. With the diversification of game farming and faming in general there are a variety of opportunities to include a game business into the farming operation.”

A genuine, sustainable Big 5 privately owned reserve with lodging of more than 10 luxury en suite rooms will start at R120 million and go up to R350 million, depending on size, region, numbers and species of game, lodges and exclusivity of the reserve. In regard to the latter, the exclusivity of these reserves needs to be protected as they attract huge amounts in foreign exchange and investment. Interested bona fide investors can contact Pam Golding Properties to discuss these opportunities.

Rubidge points out that Africa is home to exceptional safari destinations and lodges such as those in the Okavango, Zambia, and Tanzania. In South Africa the equivalent of the above and the converse of the private game reserve would be the three main concession areas adjacent to the more than two million hectare Kruger National Park, namely Sabie Sands, Timbavati and Klaserie. Here a 5 star luxury lodge located on less than 1000 hectares of land in one of the concession areas, with its open fence policy to the Kruger National Park’s big game, will cost between R35 million and R100 million, depending on the area, the improvements and the value of the traversing rights. One such property currently on the market at R62 million includes a 5 star luxury safari lodge with 10 luxury chalets with unobstructed views over the bushveld and teeming with big game.

The other big game regions such as the Eastern Cape and KwaZulu-Natal offer private Big 5 reserves. In Northern KZN, in the renowned Big 5 area near Mkuzi, a similar concession in a Big 5 reserve will sell between R15 million and R35 million for around 900 hectares of land in the reserve with lodge and other improvements.

Rubidge says in many instances private reserves with three of the Big 5 hold much appeal as elephants require specific size and habitat and lions present a challenge to people-friendly reserves, where interaction with the wildlife is as important as the Big 5. There are many magnificent reserves such as this in South Africa, yet there are very few opportunities for the investor.

One such special reserve is located in South Africa on the banks of the Limpopo River – opposite the Tuli Block which is in Botswana, where there are free ranging elephants, hippos, leopard and other magnificent big game. The special reserve property is located on a panhandle between the two rivers and has development rights for 50 x one hectare riverfront stands.

The main camp has four chalets and a lodge with lapa and conferencing facility for 25 people, with about 10 000 square metres of irrigated garden with hippos emerging from the river to graze on the lawns. The river offers excellent fishing with a variety of game fish while crocodiles sunbathing on the banks. Priced at R36 million, this property offers huge safari tourism potential, with guests able to either drive four hours from Johannesburg or land at the airstrip on the property. Besides the big game the property offers an amazing birding experience. In the UK, with its major contingent of birding enthusiasts and proliferation of bird clubs this is another market that safari destinations need to exploit.

“In addition, the hunting industry in general provides a mainstay for many towns and communities whether it is for foreign trophy hunters bringing in much-needed foreign exchange or the South African biltong or pot hunter. Most private game reserves have an element of hunting as part of their management policy and carried out ethically is an obvious income stream for a farm that has game. This farm could be a mixed livestock and game farm or it could be a lifestyle farm situated in prime game regions such as the Karoo and Kalahari. These areas are favourites for South Africans as large uncomplicated tracts of land can be acquired where game farming is a very appropriate land use. In the Cape popular areas in the Karoo such as Graaff-Reinet, Jansenville and Beaufort West offer the investor a rare chance to buy quality land for private or commercial use.

“In Beaufort West an 8640 hectare game fenced farm stocked with 15 species includes a manager’s house, four-bedroom lodge, landing strip and other buildings. Priced at R19 million, the property has no through road. In Graaff-Reinet, a magnificent undeveloped 5625 hectares of game ranching land with abundant water and a river running through it is priced at R20.75 million. While this premium game property still needs to be game fenced it affords some of the most beautiful Karoo mountain scenery offering excellent possibilities and a great lifestyle in an increasingly sought after area,” says Rubidge.