“One hundred and thirty managers responsible for homeowner assets of R18,8-billion at 85 of South Africa’s leading gated residential estates have unanimously embraced a joint SA/US management training initiative that will take them to the highest global levels of professional best practice.” 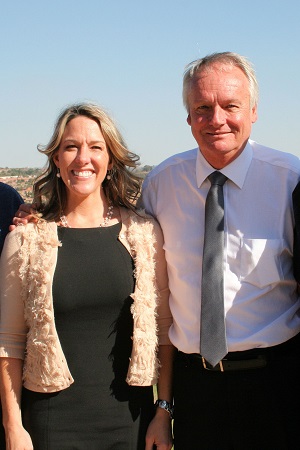 Dawn Bauman, Senior Vice-President of the Community Association Institute (CAI) of the US, and Jeff Gilmour, President of South Africa’s Association of Residential Communities (ARC).

“At the same time,” says Jeff Gilmour, President of the Association of Residential Communities (ARC), “it will create for South Africans a clearly defined, academically structured, and internationally recognised professional management career path in one of the most vibrant sectors of the country’s residential property market.”

“Until now, there has been no facility in South Africa – or elsewhere in the Southern Hemisphere – for formal best practice training specifically geared to the professional management of gated community estates,” says Gilmour.

He adds that the executive training project is the biggest by-product so far of the close collaboration between ARC and its American counterpart, the Community Association Institute (CAI), which has 32 000 members.

ARC is the only CAI chapter outside of the United States.

The 130 South African estate managers made their commitment to the formalised training initiative when they attended ARC’s recent inaugural national conference on estate management, near Johannesburg, where it topped the agenda.

“Their collective buy-in is certain to be the catalyst for a future far greater national rollout of the CAI/ARC training programme across the entire national spectrum of South Africa’s gated estate communities,” says Gilmour.

The conference was officially opened by Dawn Bauman, the senior Vice President of the CAI, who led the presentations and discussions on the training modules.

“The management training project dovetails perfectly with ARC’s overall objective of assisting home owners’ associations (HOAs) in South Africa to manage their gated estates more efficiently and, in the process, protect and grow the value of their residents’ homes.