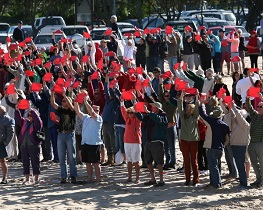 On Saturday about a thousand residents and visitors gathered at Central Beach to form a human ‘no’ sign in protest against the development and along with thousands of objections through a petition by the ratepayers association, locals made it clear that they did not support the R4-billion development.

PE-based CEN IEM Unit, which did the Environment Impact Assessment (EIA), said it had been overwhelmed by the number of objections.

“Our client has indicated that he will investigate ways of amending the proposal to make it more acceptable to the Plett community,” said CEN’s Dr Mike Cohen.

Cohen said while there were 300 people who attended the public hearings, he had received some 800 objections from Plett residents so far.

“The objections have been phenomenal, and we feel this is obviously a high risk project because of that. We will have to rethink the proposal. We obviously have noted the fears that people have.”

Plett Ratepayers Association small boat harbour portfolio holder Billy Nel said by yesterday thousands of objections had been received from residents and regular visitors from across the country and abroad.

Community Environment Forum chairman Rudi Martin said he was also pleased with the turnout at the protest on Saturday. “We are not against progress, but we are opposed to the manner in which this development is being done,” he said.

The draft Scoping report for the small boat harbour was sub-mitted to the Department of Environmental Affairs in April, with the suggestion that it could have many economic benefits for the town.

The development is envisaged to occur in and around the Piesang River mouth and Central Beach, covering 87’000m2.
While residents were given the opportunity to learn more about the development at public hearings on May 18, the Environment Forum has questioned many of its facets.

“After numerous requests the developers have come up with a video showing a fanciful and obviously incorrect artist’s impression of the supposed development which was shown to the public on 18 May, but the architect concerned made it very clear that this was not the real thing since a final design would cost millions and the developer will not lay out that kind of money until he has approval for the project,” he said.

“It will need massive breakwaters and constant dredging, and cost millions per year to keep going. You cannot earn back this sort of money from some small boats, most of which will only be used for two months of the year.

“Just as an aside, the municipality will have to demolish the desalination plant on which it spent close to R30-million not so long ago, and will probably have to bear the cost of relocating it, for the developer makes it clear that he will not.

“The developer reckons the desalination plant was constructed illegally. He will magnanimously pay for the cost of a separate EIA (a tiny portion of total cost) but not for actually building another desalination plant. This cost will probably run to at least R50-million funded by – guess who? – the ratepayers,” Van Rooyen said.

The Forum is working with local lawyer Elbie Burger and the ratepayers with Cape Town law firm Edward Nathan Sonnenberg to protest the project, which has been mooted for the past 15 years.