After a lengthy period (spanning almost six years) of subdued property sales and global economic turmoil, Pam Golding Properties (PGP) reports that the residential property market in the Western Cape appears to be consolidating into an upward trend. PGP first noted a sense of cautious optimism during the spring of 2012, but regional MD for the Western Cape metro region, Laurie Wener, says this has solidified and even increased during the first few months of 2013. 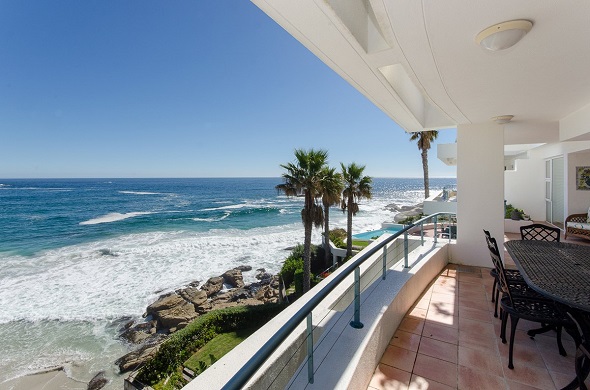 This 310sqm apartment in “The Beaches” has views of all four of Clifton’s beaches as well as the Twelve Apostles mountains. With four en suite bedrooms and a generous wrap-around terrace, the water’s edge apartment has direct beach access and 24-hour security. It is on the market exclusively through Pam Golding Properties, priced at R28.9 million.

“The increase in buyer activity became quite palpable during late 2012,” says Wener, “despite the absence of any specific economic indicators either locally or internationally, other than boosted sentiment from a market that is done with gloom and doom. Attendance at show-houses has been rising steadily since then, and general buyer response to all types of media advertising has increased. This is now translating into improved sales in a number of areas, with some of our regions such as the Atlantic Seaboard, Western Seaboard and West Coast seeing sales figures approaching and even reaching those of 2007.”

Wener notes that the trend has been sustained through the first few months of 2013, enhanced by the return of international buyers taking advantage of the weaker rand and the wide variety of properties on the market. “Whilst they are still fairly value-driven, we are seeing local, national and international buyers purchasing a variety of apartments and houses across all price ranges – including a resurgence of interest in top-end luxury properties,” she says.

An area enjoying particular success is the Atlantic Seaboard, where PGP agents sold properties to a value of over half a billion rand over the period 1 March to 31 May (2013), with approximately another R50 million in sales awaiting confirmation.  Sales in the area during this period included nine homes sold for over R20 million each, among them:

Highlights of sales in the Southern Suburbs branches during the first months of the year have included the following:

·         A record price of R9.75 million achieved in Rondebosch in February 2013 – the highest price ever paid for a residential property in this suburb

Types of homes in demand

“There has been a resurgence of investor interest and buyers of second homes in all suburbs, but most notably those along the coastline,” says Wener. “Middle market family homes in the R2.5 million to R10 million price range are in high demand in areas which offer good schooling, such as Rondebosch, Newlands, Claremont, Blaauwberg and the surrounding Western Seaboard suburbs, as well as Green Point, Sea Point, Fresnaye, Camps Bay and Hout Bay. The South Peninsula still offers great value by the seaside in Fish Hoek and the trendy suburbs of Kalk Bay and Simon’s Town, while Noordhoek offers a rural environment and some stately properties for the discerning landowner.”

There has also been renewed interest in the acquisition of brand new properties, especially those that are in the final stages of completion. Wener notes that buyers are prepared to pay a conservative premium for a brand new property, with all the modern conveniences and top security which this offers.

The demand for rental properties in the Cape Town metropolitan region continues unabated. PGP’s Rentals Manager for the Cape Metro region, Dexter Leite, reports unflagging appetite for rental homes in all areas of the city, and across all price ranges. Most significantly, there are high activity levels at the top end of the market and some notable prices being achieved.   Since 1 March 2013 Leite’s rental division has concluded 24 top-end leases on the Atlantic Seaboard and in Southern Suburbs, at rates between R20 000 and R55 000 per month. Of these, 9 were corporate lets, one an embassy let, and five were international clients.

“Whilst banks remain cautious in their lending policies,” Wener concludes, “mortgage loan applications have a high incidence of success in the well established and relatively stable Cape market, particularly when the loan to value is below 80 percent and the buyers are well qualified. The increase in this mortgage-dependent sector of the market is leading to brisk sales and even stock shortages in many areas, notably in the lower to middle price brackets. The increased demand and decreased supply is undeniably the signal for price growth.”