The City of Cape Town will be upgrading the MyCiTi Civic Centre station. During the construction period, commuters will need to use alternative routes to access the station.

A new canopy roof will be installed at the main entrance to the Civic Centre station in order to enhance the comfort of MyCiTi passengers. This new canopy will offer protection from the rain and wind as well as shade in summer for passengers queuing to purchase and top up their myconnect cards.

The installation of the new canopy roof will take three to four months to complete. During this period, commuters will need to access the station by walking up the flight of stairs on either side of the station – either on the Artscape Theatre side or the Civic Centre side – and by taking the stairs from the deck at Albert Luthuli place down into the MyCiTi Civic Centre station.

Special level access will be provided for wheelchair-users via the fire escape alongside the station kiosk. These users will tap into and out of the station on a handheld validator at the emergency exit doors that they will use to access the station.

“With the ever-increasing number of routes being launched, and the Civic Centre station being the main hub for the MyCiTi bus system, the comfort of our passengers is of great importance to us. Unfortunately, this construction is likely to cause inconvenience for the next three to four months, however, when this canopy is completed it will provide much-needed shelter from the weather for our passengers approaching the main entrance of the station, and particularly when they queue at the station kiosk to top up their myconnect cards,” said the City’s Mayoral Committee Member: Transport for Cape Town, Councillor Brett Herron. 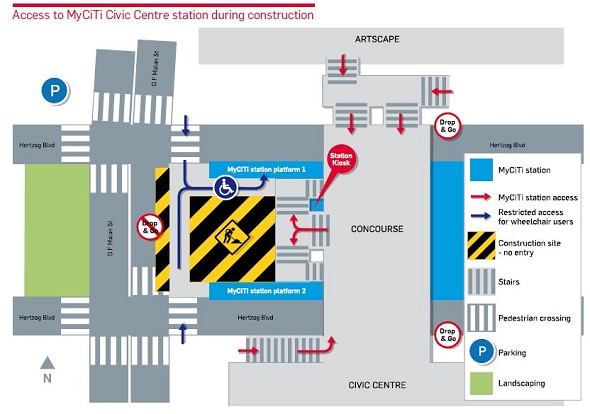