Century City Connect, Century City’s cutting-edge, open access fibre optic network, has become a prime driver of commercial and residential property sales and rentals in the precinct.  The network, which has now been deployed throughout Century City, is enabling the country’s fastest voice, broadband and multi-media services and in so doing is revolutionizing the way many in the precinct live and/or work. 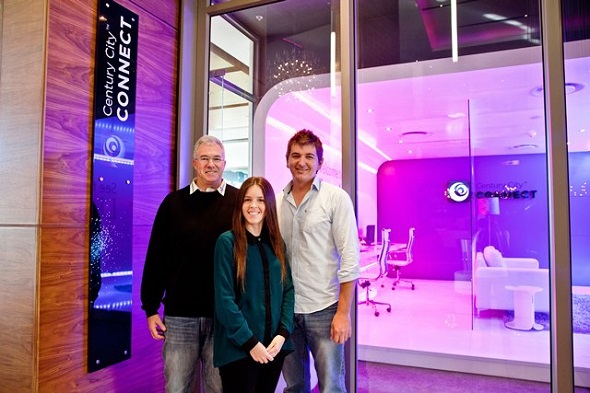 Greg Deans, a director of Century City Connect, said they had now taken fibre past all premises within the Century City precinct – a benchmark used internationally to state the reach or success of a fibre optic network.  “In fact we have put fibre directly into or adjoining the premises of around 350 businesses with all tenants  now able to have their own unique direct access to the network.”

He said to date fixed line fibre in South Africa  had largely been limited to the realm of larger, cash flush businesses who could either afford to or had no choice but to pay the prevailing prices in order to get high speed connectivity.

“It was generally perceived to be out of the reach of smaller users as it was not only expensive to deploy, but it could take anything from six to nine months for an ISP to be able to install. Even today, the best case scenario for most is four to five months.  Thanks to the rollout of our network at Century City, fixed line fibre is not only an affordable option for most businesses but it takes only 10 working days from date of order for us to connect a customer.  In so doing it is providing Century City with a very strong competitive advantage over other commercial nodes and is a prime reason office vacancies in the precinct have fallen to below 3% in spite of a significant amount of new stock having come on stream.”

He said around 70 Century City businesses and 130 residential users were already linked into the network. “Almost half of these have signed up in the past couple of months and the momentum is continuing to build both on the commercial and residential front and as new buildings come on stream. In addition many companies were locked into long term contracts with ISPs prior to the advent of Century City Connect and as those come to an end they are opting to join the network.”

Deans said to date no less than 11 Internet Service Providers (ISPs) – many of which were leaders in their field not only nationally but globally – had been signed to the network.
“While we have the big brand ISPs on board we also have some smaller niched ISPs who can address the specific requirements of smaller users. In fact we are confident that we now have the right mix of ISPs to offer not only the necessary range of services tailored to end users’ needs and pockets but also the customer interface.”

The benefits to the end-user of having such a wide range of ISPs on the network were considerable as it meant not only could they shop around for the most suitable package for them but they did not have to be locked into a lengthy contract and so could easily swop to another service provider if they were dissatisfied.

Technical director Alfie Martin said they had been working closely with the accredited ISPs to introduce exciting new packages and these varied considerably but included contended access package of 20Mbps, 30Mbps and 50Mbps options as well as dedicated access packages starting at 2Mbps and going up to 1Gbps.  “The first 1Gbps service has now been signed with a large international corporate user, which as far as we know is the largest and fastest managed service access package in the country today. The service selected by this customer will also include a fully resilient redundant link.”