Property development and management company, Abacus DIVISIONS, has announced that all stands for the newly-launched boutique office complex in Irene, Quattro Fontane, has already been sold out –only a week after its official launch. 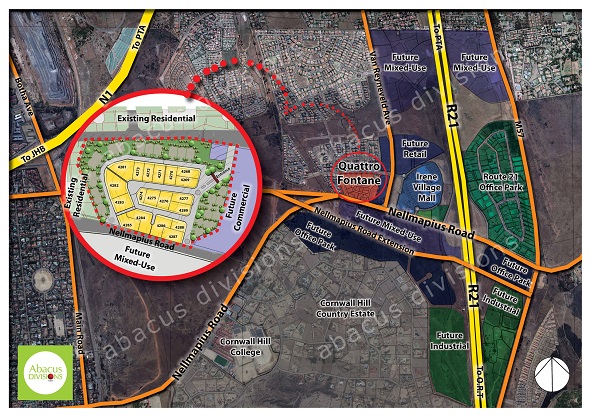 This was confirmed by Org Geldenhuys, managing director of Abacus DIVISIONS, the property management and development company – and the company responsible for marketing and selling all property at Quattro Fontane.

Geldenhuys said he had “firm offers” for all 19 stands, adding that even if these deals fell through, the company had a “slew of standby offers” to fall back on.

“If any of the buyers back out, or fail to get the necessary financing, we have offers on standby – which can then be evoked,” he said.

Quattro Fontane, situated adjacent to the Irene Village Mall, is believed to be the first boutique office park concept to be launched in the Irene area.

Quattro Fontane is the first parcel of land to be released by developers in the area, who have been given the go-ahead to develop a total of 500 000 square metres of land.

Commenting further, Geldenhuys said a number of leading property developers are squaring up to develop  the 500 000 square metres of bulk in the greater Irene area, which has now been approved for “phased development”.

The development is named Irene Central and, once developed, total investment costs should be around R10 billion.

“Quattro Fontane is the first of many developments to come. But the fact that the stands were sold out so rapidly points to the popularity of the Irene area – and the fact that the market might be starting to recover.”

Geldenhuys confirmed the next development to be released is likely to be an industrial park near to Quattro Fontane. “This is exciting times for the greater Irene area. But, over and over the fact that this amount of bulk land has been approved for mixed use development, the phenomenal response to Quattro Fontane bodes well for the future – and for the commercial property market in general.”