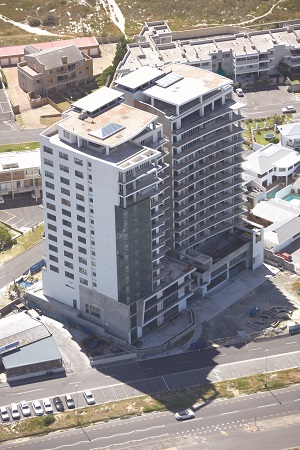 The 144 room Blaauwberg Hotel was sold by the ClareMart Auction Group for an inclusive R57.57million at the highly competitive and maximum capacity attended auction at the Radisson on Thursday, May 23

The ClareMart Auction Group under the instruction of Sanek Trust Recovery Services, liquidators of Midnight Storm Investments 386 LTD, sold the semi completed landmark Blaauwberg Hotel Development for on Thursday, May 23 at 12noon at the Radisson Hotel, Waterfront, Cape Town for a final price of R57.57million inclusive. This was accepted by the Liquidators on Monday, June 4. “The auction which had an aggressive national advertising campaign and which attracted both local and international interest, was attended by more than 150 members of the public and was filled to capacity” says Claremart Chief Executive Officer, Jonathan Russell Smiedt.

The auction saw viewers and the media spilling into the foyer from the venue which added to an intense and competitive bidding atmosphere on the hotel which formed part of the assets of the infamous Realcor Group of companies who began building the development with misappropriated funding from a multitude of investors. “Due to the massive interest expressed by the media, investors and developers as well as the intensive marketing schedule, we anticipated large numbers on the day” says Smiedt.

There was however an unexpected influx of members of the public with an interest in this much talked about liquidation which saw attempted court appeals and interdicts the day before and which almost stopped the proceedings. Bidding on the development was described as fierce and competitive with serious investors bidding aggressively on the property. “The R57.57million sale price is, in my opinion, both market related and fair when one considers the R130million worth of work necessary to complete the structure” says Smiedt. The 144 room structure, situated at the corner of Beach Boulevard and Beach Crescent, is located directly on the well renowned postcard perfect beach and offers trademark views of Table Mountain and Table Bay.

“The hotel was initially designed for an international and acclaimed award winning group and the sale of this massive opportunity will breathe new life into the development as well as the Blaauwberg beachfront” adds Smiedt.