The 23rd of May will see some 60 people gathering at “River Song”, Rawson Developers’ latest Rondebosch sectional title development (their fourth in the area) to celebrate the development’s official completion and the start of handovers. “River Song” is being ‘wrapped up’ five weeks ahead of schedule. 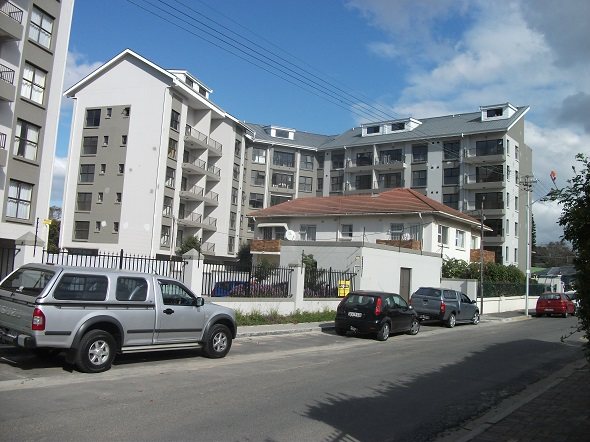 Paul Henry, Managing Director of Rawson Developers, said that even though the top prices were as high as R2,15 million, it was speculated that the this project would sell quickly and in fact, this was the case, with River Song being the first project to sell out prior to completion since the 2007 recession.

“The sales team, now operating from their own offices diagonally opposite the Rawson Property Group’s head office on Main Road Rondebosch,” said Henry, “were completely sold out by mid-February. It is worth recording, too, that not one of the new owners have indicated that they wish to resell, despite it now being common knowledge that on “The Rondebosch”, positioned just 400 m away and completed a few months previously, the first two resales have already taken place, both at a 28% profit.”

“River Song” is on a site which overlooks the Liesbeeck River and walking trail. The six storey complex is bounded by Roslyn, Ramsey and Haldane Roads and has 40 sectional title units in all and an entire floor reserved for parking. Each unit has one or two bedrooms and the floor areas vary in size from 43 m2 to 93 m2.

“The siting and the configuration of the units,” said Henry, “makes them ideal for university students. “River Song” is, in fact, within 10 minutes’ walk of UCT’s main campus.”

All units have balconies and come with such standard fittings as black granite countertops in the kitchens and a choice of tiles or laminated flooring tiles in the living areas. The majority of the apartments face either north or west with most having impressive views including the Table Mountain back spine from Devils Peak to Constantia.

Trevor Weston-Green, Rawson Developers’ Sales Manager, said that buyers have, to a greater extent than ever before, customized their units, selecting from a wide range of finishes and fixtures made available to them through the sales team. One of the most popular ‘improvements’, he said, was the use of a pale white Caesarstone instead of the standard black granite tops. Sophisticated light fittings are standard in the units.

The project, said Henry, was launched at prices of R895,990 to R2,15 million, but already there are potential buyers willing to pay 15% to 25% more to get hold of a unit – if and when such units become available.

Weston-Green said that four further Rawson Property Group developments are now in the pipeline, all within three kilometers of this site. These, he said, would be at Claremont (“The Beaumont”), at Kenilworth, at the Marist Sports Club (“The Oval”) and in the Main Road at Rondebosch. Henry commented that these developments will keep Rawson Developers active well into late 2015/early 2016.