After six and a half years, one of the longest public participation plan revisal and replanning periods experienced in the 20 year history of Rawson Developers, the company has been given, by the City of Cape Town, the go ahead to develop their R140 million Rondebosch Oval residential development. This is sited on 30,000 m2 of land on the southern side of the Marist Sports Club cricket oval in Park Road, Rondebosch, Cape Town. 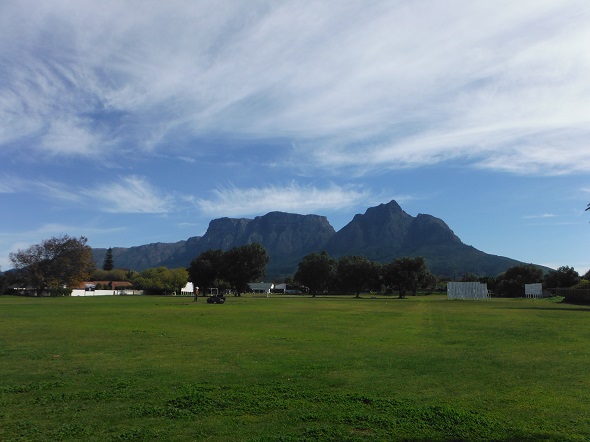 A partial view of the 30,000 m2 site where the R140 million Rondebosch Oval residential development will be built.

Paul Henry, Managing Director of Rawson Developers, said that some six or seven months ago it appeared that all objections had been met and a public announcement to this effect was made and now the City of Cape Town has approved of the development in its entirety.

The much revised scheme is a drastically scaled down version of the original proposal, which was for 70 plus smaller homes designed to sell at around R1,2 million each. Local residents and concerned bodies in the end voted against this on the grounds that they would over-bulk the attractive Marist Sports Club grounds.

In the new development, now approved, there will be 41 upmarket townhouses. They will have three or four bedrooms, all with balconies from which the majority of occupants will be able to enjoy views of Devils Peak and the southern spine of Table Mountain. The homes will also look onto the cricket field and some will look onto the bowling green.

“The whole development”, said Henry, “is now unmistakably upmarket. The quality of the finishes will, therefore, be high. Our architect, Gordon Hart, has specified granite and engineered stone tops for all the counters, high grade porcelain tiles and/or laminated wood to cover the floors, aluminium frames for all the windows and doors and sophisticated down lighting in all the open-plan areas. Units will also be wired for DSTV.”

Particular care, said Henry, had been taken to minimize energy use: the windows and sliding doors will be heat reflective and heat pumps will be installed into all homes.

Henry stressed that buyers will have a wide choice of finishes and fittings and will be able to alter the internal layout of the units in line with various options.

From the outset, he said, that the Marist Sports Club committee, chaired by Professor Raz Ramesar of the University of Cape Town, has been highly supportive, seeing this development as a way to eliminate a backlog of debt, to improve their own facilities and those of related organisations – and to attract new members.

“They are now set to become one of the most desirable sports clubs in the Western Cape,” said Henry.

Rawson Developers’ ancillary work on this site, all done at their own cost as part of the deal, will help bring about the transfer of the so-called ‘B’ Field from the Department of Education to the Rosebank Junior School, who have hitherto had no fields at all. Rawson Developers will also realign and upgrade the children’s changing rooms and pavilion. The club, as a result of the deal, are now able to build a modern clubhouse with changing rooms, a restaurant and a pool.

The townhouses, which will be free standing, will be in three gated villages and these, in turn, will be encircled by a single electric fence. Access to the residents’ units will be controlled by biometric monitoring and guards will be kept at the main gate on a 24/7 basis. Their work will be complemented by those of a roving guard. Close circuit TV cameras will also monitor all movement in and out of the estates and along the perimeter fences.

Right now, said Henry, the Rawson Developers team is working on final designs and it is more and more apparent that this will be one of the most attractive and exciting developments launched by the company.

Henry said that as part of their sales package all home owners will automatically become members of the Marist Sports Club and he envisages various bodies being involved in the management of the estate: three home owners’ associations, a residents’ association, a club members’ group and a master home owners group.

The official launch of the project is scheduled for later this year.