The new R400 million Eyethu Orange Farm Mall is poised to act as a major catalyst not only for the Orange Farm and Evaton areas, but for the whole Greater Sebokeng region. 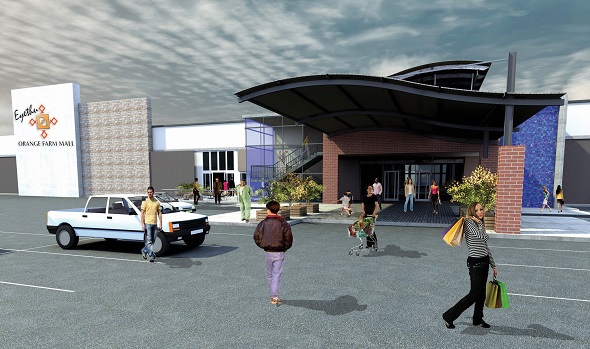 With major retailers already secured for the 27,000m² mall and transport infrastructure upgrades underway, the regional mall development, with expansion rights of up to 35,000m2 gross lettable area (GLA), is on track to form the core of Orange Farm’s new Town Centre.

Developed by Flanagan & Gerard and Stretford Land Developments, earthworks have already commenced, with the mall scheduled to open for trade in September 2014.

“We are proud of the fact that our development has been designated a “Presidential Project” with National, Provincial and Local Government support because of its community upliftment initiative,” says Flanagan & Gerard’s Peter Gerard.

Road improvements and taxi rank upgrades have already commenced, and links to the adjacent Stretford Station are a key element of the mall’s design.

“We, the Orange Farm community and the City of Johannesburg’s Region G, are creating a new town centre with an integrated transport hub that connects Eyethu Orange Farm Mall with Stretford Station, and the Golden Highway which is to become the “Jabulani” of the South.

The current critical mass of retail is 32,700m2 with growth potential to approximately 61,000m2 GLA on both sides of Stretford Station,” says David Lieberman of Stretford Land Developments.

Investors in the project include the two developers, Dipula Income Fund, and the Orange Farm Community Trust.

The residential areas of Orange Farm and Evaton have seen fast-paced growth in the past seven or eight years, with the current population at 400,000 people in 110,000 households. Most households fall into lower- or middle-income brackets.

“Some 50,000 households lie within a 10km radius of the mall and new growth of about 20,000 households is forecast in close proximity to the site over the next decade,” says Izak Petersen, CEO of Dipula Income Fund, pointing to extensive research conducted at the site.

”Dipula is delighted to be part of this project and, together with our partners, provided funding for the Community’s equity. This investment is in line with our strategy to invest in previously disadvantaged communities and to make a meaningful contribution towards their upliftment.

Dipula has already acquired the first phase of the development, of approximately 5,700m2, with anchor tenants Boxer Supercity and Cashbuild, and both have reported good trading. We will build a KFC Drive-thru on the same site in a few months,” says Petersen.

“Importantly, where a community has no mineral wealth, its only wealth is its buying power. Eyethu Orange Farm Mall has created an avenue for the Orange Farm Community to participate in its own wealth creation through an ownership in the mall,” says Vusi Tshabalala of Stretford Land Developments.

A large part of the mall’s trade is expected to be ’walk-in’ shoppers. Commuters are likewise a distinct target market for the mall, with Stretford Station alone seeing some seven million passengers a year from as far afield as Lenz, Lawley, Kwaggastroom, Houtheuwel and Grasmere.

The centre will offer free, open-air parking to shoppers in private vehicles.

The two-level mall will offer an array of national and local retail tenants, with an emphasis on food, household goods, fashion and services.