The City of Cape Town seeks to, as far as possible, provide dignified, safe and affordable housing to those residents who are most in need.

The Silvertown Upgrade Project, which will see the construction of a total of 800 units in the area, is an example of the City’s commitment to redress and redistribution. Today, 28 May 2013, families received their keys for the first five completed units. 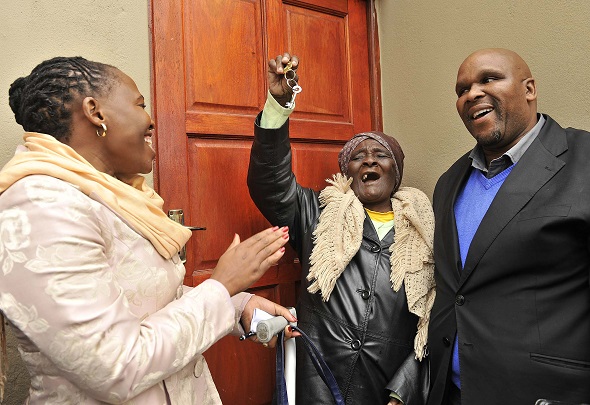 The project was implemented as part of the City’s aims to formalise the upgrading of the Silvertown informal settlement, which is the second oldest settlement in Khayelitsha; it has been an established community since 1989.

The Silvertown area was used to decant destitute residents from other informal settlements in Khayelitsha where basic services such as water, electricity, sewerage, solid waste removal and paved roads could be provided.

The Silvertown Upgrade Project aims to provide formal houses and access to basic services for the families in this community, as well as providing them with formal tenure and entry into the property market.

The project has been split into two phases, the first of which involved the in-situ upgrading of the area and the installation of civil services such as roads. This development was concluded in 2009.

The second phase of the development involved the construction of houses using a Peoples Housing Process (PHP) as stipulated in the National Housing Policy. This programme allows for community participation during the construction process.

“A PHP allows for collaboration between the City and the community, thus ensuring that the interests of the community form a central point in the delivery of housing opportunities,” said the City’s Mayoral Committee Member for Human Settlements, Councillor Tandeka Gqada.

Four business plans for 800 units were approved in June 2012 and the construction of the houses began in October 2012.

The first 400 houses are currently under construction, while a further 400 are planned for the new financial year.

With the handover of the first five houses, these families will finally be able to say that they are the proud owners of their own homes.

“Home ownership is one of the most significant economic achievements for an individual. As part of our vision of building a Caring City, we are absolutely committed to providing dignified living areas that communities can be proud of. We know that the provision of this kind of opportunity leads to a community’s brighter future,” said Councillor Gqada.