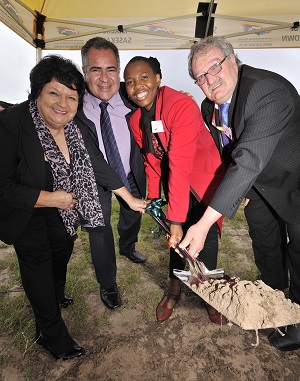 Today saw the official launch of the Rugby development by the City of Cape Town, Nedbank and developer, Inframax. The launch was demonstrated by a sod-turning ceremony attended by a number of stakeholders.

“This initiative forms part of the City’s commitment to building communities, not just houses. We know that in the right environment, with the right opportunities, our residents can thrive,” said Councillor Tandeka Gqada, Mayoral Committee Member for Human Settlements.

The finance agreement forms part of the bank’s existing long-term relationship with the City of Cape Town following its appointment by the Cape Town administration as a joint venture partner with Inframax Holdings and Shisaka Investments for the development of four Cape Town affordable housing projects to be undertaken on City-owned land.

“This has been a long journey and we are pleased to have reached this pinnacle where, by participating in this tripartite agreement, Nedbank not only demonstrated its commitment to the Affordable Housing Market and the principles of Government’s integrated housing objectives, but more especially to improving the living conditions of South Africans,” said Manie Annandale, Head of Nedbank Corporate Property Finance: Affordable Housing.

In a further alignment between the stakeholders, the environment will be greened with a view to enhancing the living conditions of the development. This is in line with the City of Cape Town’s vision of providing its citizens with lifestyle upliftment opportunities rather than mere houses. As such, Silver Meadows in Rugby is designed to ensure residents enjoy secure living and have easy access to the City’s Integrated Rapid Transport (IRT) routes and all amenities. Furthermore, it speaks to Nedbank’s stated commitment to supporting and enabling integrated social and environmental sustainability.

Silver Meadows is a low-density housing project that will offer 92 one- and two-bedroomed apartments as well as 23 three-bedroomed semi-detached homes. The units are priced between R425 000 and R708 000.

In conclusion, Annandale stated that in Cape Town alone, Nedbank has signed loan agreements with affordable housing developers with strong track records to the total value of more than R500 million – set to yield some 5 500 housing opportunities for Capetonians in the coming months and years – which further illustrates the Bank’s commitment to helping address the country’s housing shortage and uplift its people and communities through innovative partnerships.