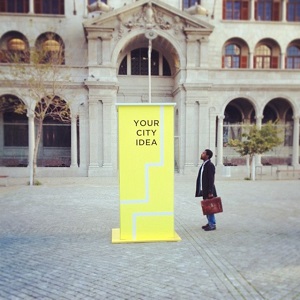 The hosting of the Your City Idea Project at Church Square is one of the most successful in terms of voter turnout since its inception.

On Friday 17 May, curious onlookers and pedestrians were drawn to a bright yellow modular box structure in the centre of Church Square in the Cape Town CBD. The structure known as the Your City Idea Project is a ballot box installation that was created to breakaway from the traditional techniques of gathering information from the public while at the same time facilitating meaningful public engagement on social and urban issues. It is can be described as a rather unconventional and innovative means at introducing creative urban design features for public spaces, and a drive to encourage citizens to think about the way their city is designed in terms of service delivery, access and sustainability.

The Your City idea is currently initiated by the Urban Intelligence Unit (UIU), the research wing of Future Cape Town and it was designed and sponsored by design specialist exhibition company, HOTT3 Dimensional Marketing. The hosting of the installation on Church Square was made possible by Terri Carter, Senior Project Manager of Cape Town Partnership.

The first question asked voters about what their future community would look like. The voters could choose between: an informal city, suburban meets the city, suburbia and a compact city. The second question asked voters to vote for one of 4 options for the future of the Foreshore freeways namely: demolition, activating the spaces below, constructing a museum on unused portions and creating a public walkway, much like the New York Highline.

For Question 1, In your Future Cape Town, our communities look like?, the results are shown in the table as follows:

For Question 2, In your Future Cape Town, the Foreshore freeways look like?, the results were as follows:

Table 2: Voting Results on the Future of the Foreshore Freeways

The winning option for the first question chosen by citizens, Suburbia meets the City, is originally Bjarke Ingels’s “8 House” in Copenhagen. In a nutshell, this is a 3-dimensional urban neighbourhood where the convenience of housing, business and recreation intertwine. It is currently the largest private development in Denmark.

The winning vote for the second question, Demolish and Reconnect, is actually taking effect in Seattle. Many voters seemed to like the idea of the city gearing towards non-motorised access and modes of transport thereby enabling Cape Town to be a more sustainable city. However, this did not come without criticism whereby some voters argued that “demolishing the freeway would be like getting rid of an icon that has been associated for so long with the landscape of the city”.

“I think the City should rather include designs on public spaces for communities for events, festivals, etc” said another voter who opted to choose ‘neither’ of the options made available.

Rashiq Fataar, Managing Director of Future Cape Town mentioned the role of social media as a large part of the project’s success, “I see the same power when I think of the possibilities at least in Cape Town, to use social media more effectively across organisations and mandates and institutions.”

While Olamide Udoma, one of the UIU researchers on the team, described her first experience working on the Your City Idea installation: “I was able to hear the opinions of people living all over Cape Town due to where the voting box was situated. It was great to hear how people feel about their city and the changes they would like to see; urbanists in the making!”

The ballot box installation will continue to make its way around various public spaces in the forthcoming months, and the UIU will be keen on extending meaningful public engagement opportunities on urban outcomes for the city of Cape Town.