Construction is well underway on a new luxury apartment building on the Mouille Point coastline – and Pam Golding Properties (PGP) reports that just eight units remain available for purchase in the building. “Amalfi” is located at the north-western corner of the Green Point Urban Park, with panoramic views over Table Bay, the Green Point Urban Park and surrounding mountains. The building looks set to become an iconic landmark for this area, often described as the “Platinum Mile”, with a striking modern aesthetic of glass and steel. Designed by acclaimed architects Fabian and Berman, it will be the only apartment building on the entire Atlantic Seaboard in which every single apartment features mezzanine levels and double volume spaces. 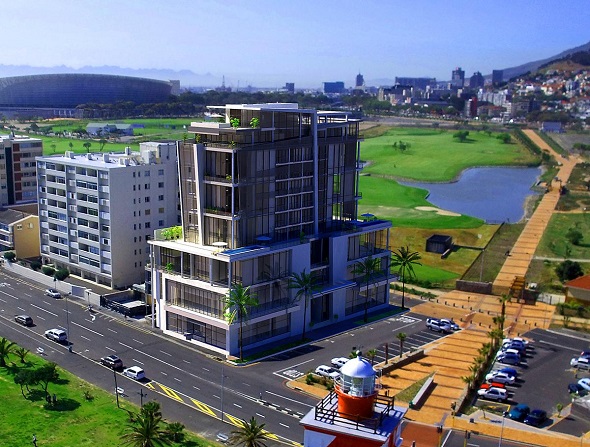 An artist’s impression of Amalfi, the new luxury apartment building on the Mouille Point coastline. Construction is underway, and Pam Golding Properties (PGP) reports that just eight units remain available for purchase in the building.

PGP’s area manager for the Atlantic Seaboard and City Bowl, Basil Moraitis, says 14 of the 24 apartments at Amalfi have already been sold by PGP, several of them to buyers who have purchased multiple units which they intend consolidating. The top level has been reserved for a spectacular single penthouse measuring 683sqm, while level four will feature two enormous consolidated apartments with large patios and private swimming pools. “Sales total over R90 million to date (mid-May 2013),” says Moraitis, “and that’s excluding the retail component on the ground floor, which has been secured by an international deli operator. Buyers have been attracted by the superb location, close to the V&A Waterfront, Atlantic Seaboard beaches and CTICC, as well as the luxury finishes and double volume spaces, and of course the views. Every single apartment in the building will enjoy a panoramic outlook, either across Table Bay towards the Blouberg coastline, or across the Urban Park and Metropolitan Golf Course, towards Table Mountain and the slopes of Signal Hill.”

Moraitis says the popularity of Amalfi is consistent with the brisk pace of sales in Mouille Point overall. “From January 2012 to the end of April 2013, 45 apartments have changed in this suburb (across all agencies). PGP agents Lynn Pinn and Paul Levy concluded just under 50 percent of those sales, selling 21 apartments at an average of R3.62 million – well above the area average of R3 million. Their total sales value of R76 million represents well over half the total value sold by all agencies during this period.” (source – Propstats)

Among Pinn and Levy’s most notable sales were four of the six top prices achieved in the area, namely:

For more information on Amalfi or other properties for sale in Mouille Point, contact PGP area specialists Lynn Pinn (083 631 4890) and Paul Levy (083 300 3001) or call their office on 021 439 1614. PGP’s area manager for the Atlantic Seaboard and City Bowl, Basil Moraitis, can be reached at basil.moraitis@pamgolding.co.za.