Ten of the 30 homes in “Nieuwe Steenberg”, a R200-million luxury secure gated lifestyle estate set in the Cape Peninsula’s historic Constantia Valley, have been sold well ahead of scheduled completion of the development (at the start of 2014). 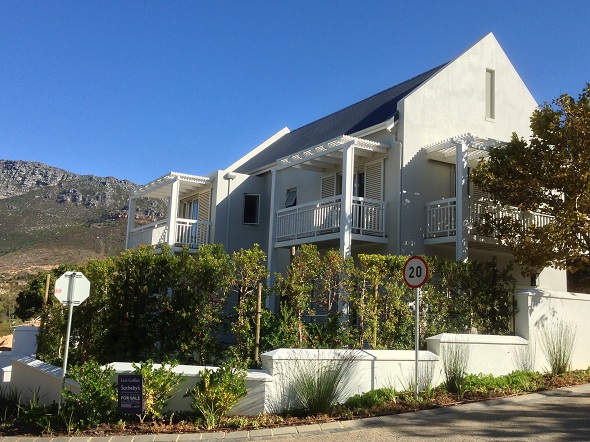 This was announced by the scheme’s Cape Town developers, Warner Projects and Land Equity Investments, who are co-developing the estate with Sasfin Private Equity.

Land Equity Investments is currently involved in a R1-billion-plus programme of top end developments in the Western Cape, while Warner Projects has developed distinctive upmarket residential estates and security complexes in the Cape Peninsula and Johannesburg…with a total sales value of around R1-billion.

Surrounded by vineyards and tranquil beauty, Nieuwe Steenberg lies beneath the Steenberg and Constantiaberg mountains, on an elevated, well-treed, site with gentle north slopes.

The development is adjacent to the Steenberg Golf Estate, which property sector analysis group Lightstone has rated second (between Clifton and Llandudno) on a list of South Africa’s top ten highest priced residential areas.

Security is a paramount feature of the development, and homes in Nieuwe Steenberg all have three bedrooms en suite and are priced at between R3,9-million and R12,9-million (Vat inclusive). Distinctive floor plans range from 235sqm to 475sqm.

Designed by dhk Architects in modern Cape Vernacular style, the double-storey homes all have magnificent views of the surrounding landscape, which are optimised by generous use of large windows, glass doors, balconies, and exterior decks.

The luxury interiors feature the finest quality finishes. Furthermore, energy saving features – including thermal insulation and heat pumps – are included in each home, which will cut Eskom bills.

Other aspects of Nieuwe Steenberg homes are

In addition to the constructed and furnished showhouse, construction of five of the sold homes is already well under way, while building is about to start on another four.

The provision of services is in top gear – including the gated entrance and perimeter wall; palisade fencing and other security infrastructure (such as camera installations and a guardhouse); tree-lined new roads with landscaped pavements; electric power and sub-station.

Additional lifestyle benefits and features of Nieuwe Steenberg include:

• proximity to some of the area’s leading wine farms, (including Steenberg, Constantia Uitsig, Groot Constantia, and Buitenverwagting); and to modern shopping hubs, like Steenberg Village Shopping Centre, Blue Route, and Constantia Village
• its positioning alongside the Championship Steenberg Golf Course, and proximity to other courses, such as Westlake and Clovelly
• walking distance to Reddam House School (pre-, primary and high)
• easy access to highly acclaimed restaurants, such as Catherinas, Bistro 1682, La Colombe, Uitsig, River Café – as well as other eateries and coffee shops
• A short distance to the nearby beaches of, among others, St James and Kalk Bay

In addition, the estate is near to local office and other business premises; is just 30 minutes from both the V&A Waterfront and Cape Town International Airport; and only 500m from the historic Steenberg Hotel, spa, and winery.