The opportunity to live on the very water’s edge is highly sought-after worldwide – and Cape Town is no exception. Marina developments remain among the most desirable addresses in the Mother City, with areas such as the V&A Waterfront and Granger Bay having a reputation for sophisticated living in a glamorous environment. While global economic conditions in recent years have reduced the appetite of foreign buyers, Pam Golding Properties (PGP) reports that there has been a recent resurgence of interest – both local and international. 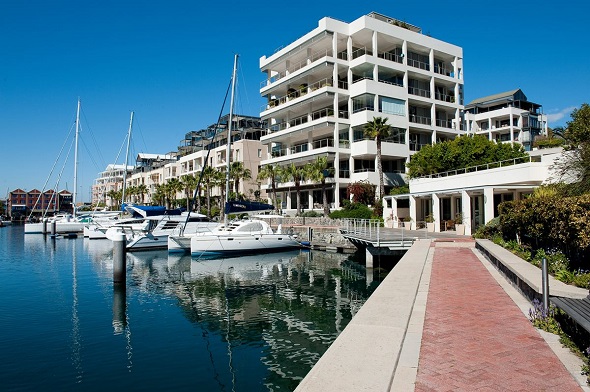 Pam Golding Properties is marketing one of the most exclusive apartments in the V&A Waterfront, a three-bedroom duplex penthouse in the Pinmore building. Measuring a substantial 833sqm, the apartment has views over the yacht marina and ocean, as well as back views over Table Mountain. Spacious reception rooms provide an entire floor of entertainment space, including a private swimming pool. The apartment offers every conceivable luxury including air-conditioning, under-floor heating and a private direct-access elevator. It is on the market at R65 million.

PGP’s area manager for the Atlantic Seaboard and City Bowl, Basil Moraitis, says between 2009 and 2011, the V&A Waterfront averaged around 20 sales per year, to a total value of just over R200 million. Yet in the past six months alone (October 2012 to mid-April 2013), 17 properties have changed hands at the marina, totalling over R191 million. (Source – Propstats) “That’s nearly double last year’s (2012) annual amount, in a six-and-a-half month period,” Moraitis says. “The improved sales activity is consistent with a steady increase in demand from non-resident buyers wishing to purchase investment properties at the V&A, among them a number of international investors. Gauteng and KwaZulu-Natal buyers have also been very active in this market, while local buyers continue to show interest in owner-occupier units. In general, there is strong demand for all types and sizes of apartments, from R4 million studio or one-bedroomed units, to the most super-luxury penthouses priced over R70 million.”

Of the 17 sales during this period (October 2012 to mid-April 2013) PGP agents Lynn Pinn and Paul Levy concluded more than half of them, selling nine apartments to a total value of over R91 million. “It’s no surprise that this skilled team of agents has over 50 percent market share,” says Moraitis. “They literally know every building in the marina, inside and out, so are able to offer clients very precise advice on what is available for purchase and which apartments would best suit their individual needs.”

Most notable deals concluded by Pinn and Levy in this period included:

Moraitis notes that while the front row of the marina (directly overlooking the yacht basin) has traditionally been the most popular section of the V&A, recently there has been a surge in demand for canal-view units. “For example, our R25 million sale in April was to an international buyer who only wanted to be shown canal-facing apartments,” he says.

The Water Club at Granger Bay has a somewhat different buyer profile to the V&A Marina, in that it tends to attract a higher percentage of long-term resident buyers. As a result, fewer properties change hands each year. However the development remains a popular and prestigious address, only enhanced by the development of the nearby Cape Town Stadium precinct and Green Point Urban Park. The quiet water‘s edge setting and excellent connectivity with the city ensure demand remains unwavering. Just three apartments have changed hands in the past six months, all of them sold by PGP. (Source – Propstats)  The most notable deals included:

“There are some exceptional investment properties on offer at both the V&A Waterfront and the Water Club at present,” Moraitis concludes. “These marinas are home to some of the most discerning and sophisticated owners in the country, and remain a favourite among international tenants, boosting the appeal for investor buyers. Their central location, close to the Waterfront shopping precinct, the central city and Cape Town International Convention Centre, as well as the easy access to the Atlantic Seaboard beaches, ensures their unflagging popularity and unsurpassed lifestyle.”

For more information on properties for sale at the V&A Waterfront or Water Club, contact PGP area specialists Lynn Pinn (083 631 4890) and Paul Levy (083 300 3001) or call their office on 021 439 1614. PGP’s area manager for the Atlantic Seaboard and City Bowl, Basil Moraitis, can be reached at basil.moraitis@pamgolding.co.za.