The Southern Suburbs of Cape Town, spanning the area from Pinelands and Mowbray through to the Constantia Valley and Tokai, remain enduringly popular thanks to their central location, well-built homes, and excellent schools, shopping and recreational facilities.  Pam Golding Properties (PGP) reports that the area is one of the most recession-resistant in the Cape metropolitan region thanks to these pull factors, which continue to attract buyers even in times of reduced market activity. 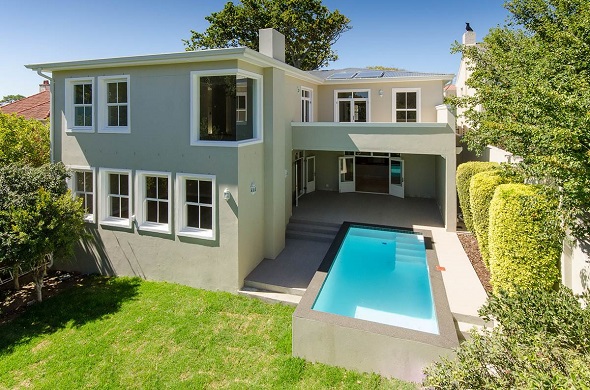 This brand new home occupies a prime position in Upper Claremont. The home is for sale exclusively through Pam Golding Properties, priced at R10.2 million.

PGP’s MD for the Western Cape metro region, Laurie Wener, says the area has broad appeal to a wide range of buyers.  “Not only is this the area of choice for many family buyers, it has a reputation for attracting leading medical professionals, academics and others specialists, as well as investors, upcountry and overseas buyers,” she says.

PGP’s area manager for the Southern Suburbs, Howard Markham, adds that the area offers something for every pocket and lifestyle need, from chic apartments to starter homes, character-filled cottages, spacious family residences and luxury mansions.  As a result, prices can range from around R800 000 for a studio apartment in Wynberg, Claremont or Kenilworth, to over R30 million for top-end properties in prestige areas likes Bishopscourt and Upper Constantia.

“The first quarter of 2013 has seen steady demand for homes in most suburbs,” says Markham, “with activity strongly focused on the more affordable segments in each particular area.  Buyers remain acutely aware of value for money in the current economy, so demand is often highest in the lower-to-middle price ranges – which can be anything from under R1.5 million in Wynberg, under R4 million in Rondebosch, or under R10 million in Bishopscourt.  These more affordable price ranges are in fact seeing a shortage of stock in many areas, resulting in competition for homes and often multiple offers on the same property.  We have had some instances where sales were made even before a property had been formally listed.”

Markham says PGP’s Southern Suburbs agents have sold over 80 homes, to a total value of more than R250 million, in the first quarter of 2013.  Some of the most notable sales activity has been achieved in Bishopscourt, Newlands and Rondebosch.

Sales activity in Bishopscourt and Upper Claremont has been most active in the lower- to mid-range price brackets, which for these suburbs equates to R5 million to R7 million.  Demand is primarily from families seeking homes with ample space and large gardens for their children to enjoy.  The desire to live within the catchment area of leading schools is one of the key factors attracting this category of buyer to the area.  PGP agents Myrna Duveen and Richard Epstein say stock levels in this price bracket are low as a result of the sustained demand, resulting in such properties selling very quickly.

Even those homes priced somewhat higher are not lingering on the market – for example, PGP recently sold a family home in Upper Claremont within a single day of listing, for R11.7 million.  “There are some outstanding and character-filled homes on the market in the R10 million to R15 million price range at present, from classic older homes to brand new modern constructions,” say the agents.

Newlands has seen steady sales activity in the first quarter, with PGP agents Heather Turner and Vickie Francis selling six homes in this period to a total value of close to R29 million.  The highest demand is for homes around the R4 million mark, resulting in a shortage of stock in this price range at present.

The bulk of demand is from family buyers, attracted to the suburb’s central location, sizeable homes and proximity to top schools and sports facilities.  Other buyer categories include investors as well as out-of-town purchasers seeking a secure lock-up-and-go home in Cape Town.

Market activity has been brisk in Rondebosch, with PGP selling eight properties in the first two months of the year, compared to three homes sold during the same period in 2012.  PGP’s sales in January and February 2013 totalled close to R36 million, and included a record sale of R9.75 million for a home Rondebosch Golden Mile, which attracted two competing offers at full asking price within a fortnight of listing on the market.  This is the highest price ever achieved for a single residential property in the suburb, topping the PGP’s own previous best price of R9 million, achieved in February 2011.

Agents Pearl Sparks and Robin Midgley say the highest activity has been seen in the R2 million to R4 million price range, with particular demand for medium-sized family homes located within the catchment areas of top schools.  Properties with potential for expansion are particularly popular.

Buyers have included a number of young families either upgrading within Rondebosch or moving from nearby suburbs such as Claremont, Pinelands and Rondebosch East, in order to be closer to their schools of choice.  There have also been purchases from buyers relocating within South Africa or from overseas.  Additional buyer profiles include parents purchasing homes for their student children, investors seeking buy-to-rent properties, and non-residential buyers seeking properties for use as a medical practice, play-school or work-from-home base.