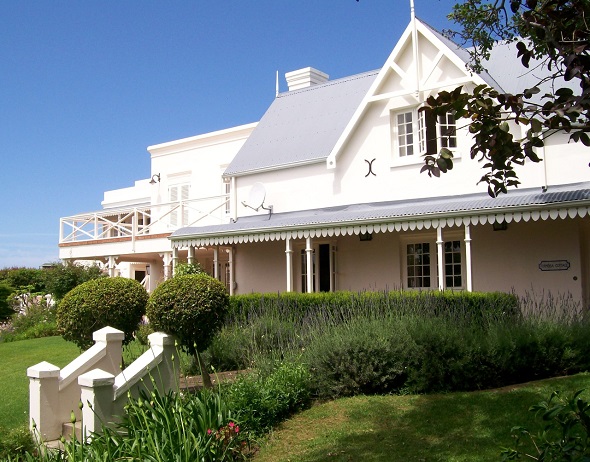 Sold by Pam Golding Properties for R10.5 million, this mansion – originally a rectory, is a reminder of life in years gone by when Plettenberg Bay was just a small fishing village. The timeless architecture has been restored to its original grand style while the addition to the side of the house complements the Cape Georgian design perfectly, providing spacious entertainment areas. With five en suite bedrooms and situated within walking distance of town, the property has superb views over the bay.

“In recent months there’s been a marked increase in interest and sales activity in Plettenberg Bay, mainly in the R1.5 million to R2.5 million price bracket. Currently, the average asking price for an apartment is in the region of R1.5 million to R1.7 million, and between R4.5 million and R5 million for houses.

Dobson says over the past few months there has been a notable rise in the volume of properties sold in ‘Plett’. “Positive news is that a number of developers are looking at various options in order to build retirement villages, while the development of a new apartment complex just off the N2 to Knysna aims to cater for government employees such as police, teachers and nurses.

“There is also talk of a small boat harbour project which is envisaged to house fishing boats, pleasure cruises, boutique retail stores, eateries and accommodation which will include residential apartments and possibly a hotel. If this project goes ahead it will create work for local builders, plumbers and electricians, helping boost Plettenberg Bay’s local economy.

“Currently there are discussions taking place in regard to upgrading the existing airport situated about five kilometres outside Plettenberg Bay in order to accommodate smaller passenger-carrying planes. If this project goes ahead, it will make the area even more accessible to out of town visitors and home buyers, including those seeking leisure homes.”

Comments Dr Andrew Golding, CE of the Pam Golding Property group: “With a strong background as a highly successful sales agent and as our area principal in Knysna, Ling Dobson brings her entrepreneurial skills and extensive experience to Plettenberg Bay, an area which is poised to undergo resurgence in its residential property market.”

With a growing number of permanent residents, which currently comprises about 20-25 percent of the total, homeowners in Plettenberg Bay include successful business people and the well-heeled who together with their families and friends, spend holidays in the area or even relocate permanently and commute on business as required. Numbers are reportedly also growing at the local primary school.

Says Dobson: “While it’s true that there too many properties for sale at present, asking prices are reaching more affordable and realistic levels. Over the recent December/January holiday season vacant land sales in one secure estate realised in the region of R10 million, with approximately 30 stands sold. I believe we are beginning to see the end of forced sales and the start of normalisation of the market.

“An example of what is achievable is a home which was purchased for R1.7 million about a year ago, which sold for R2.85 million in November 2012. A fair amount of work was done on the house, but it achieved a very good return for the seller.”

Properties in Plettenberg Bay range from vacant land in a secure estate priced at R160 000 to beachfront homes for R25 million. Apartments are priced from approximately R550 000 to R17 million for those in a prime beachfront location, and houses from R1.4 million up to R26 million for a beachfront dwelling.

Dobson says the most popular price bracket is between R1.5 million and R2 million for three bedroom, two bathroom homes, among buyers looking for a slower paced and more appealing lifestyle. There is also an increase in demand from investors seeking mostly upmarket holiday homes, mainly among Cape Town buyers, followed closely by Johannesburg and Pretoria purchasers.

“We believe that Brackenridge Private Estate is about to take off, particularly as there seems to be a growing trend towards secure, private estates. With a total of 280 properties in the estate, some 15-20 percent of these have been developed, with 19 homes in the process of being built and some 20 plans recently submitted to the homeowners’ association. Here Pam Golding Properties (PGP) is marketing vacant land priced from R450 000 to R1.8 million, with the average price in the region of R650 000 to R750 000. Homes range from R2.9 million to R10 million, with an average asking price of R4 million.”

Dobson says waterfront properties are becoming very scarce. At Beachy Head there are a few top end homes which sold recently at prices between R18 million and R25 million. There are properties available from R5 million which are set slightly back from the water, on the other side of the road. In regard to vacant land on the beachfront, stands of 800-900 square metres are fetching in excess of R3 million from Plettenberg Bay through to Keurbooms.

“The best value for money available at present is a bank assisted sale – a home now listed with the bank at R1.75 million, having been on the market for a considerable length of time at R2.5 million. It does need some work but with minimal spend this home could be transformed into something special. Another property, with four bedrooms and three bathrooms, offers a generous-sized home on a green belt and just a stroll from the beach, with an asking price of R3.39 million.” PGP is also marketing a six bedroom, six bathroom home in an up and coming part of Plettenberg Bay, with scenic sea views and a huge wooden deck for entertaining and splash pool, at R3.2 million.

Plettenberg Bay is a popular venue for the annual Plett Rage festival, which generates significant income for the town, with the added benefit of exposing the appeal of the area to school leavers starting out in life. Adds Dobson: “This is positive for the town’s future growth, and it’s also a fact that some of those who today own holiday homes here used to visit Plett on holiday as children.”