A Mowbray site with prime redevelopment potential will be submitted for public auction by the ClareMart Auction Group during their upcoming April Multiple Commercial and Investment Property Auction on Tuesday, 30 at the Radisson Hotel, Granger Bay. The 1360m2 site is situated in the midst of the popular ‘student corridor’ and would lend itself to a large scale mixed use development.

“Our Group has recently seen a significant amount of interest in properties aimed at student accommodation, especially in the University of Cape Town precinct, and have in the last year period alone sold opportunities which cater to that market, including to the leading nearby tertiary institution itself. This offering offers close proximity to that institution which adds to the appeal for investors and developers” says Sales Director, Farrell Perling. 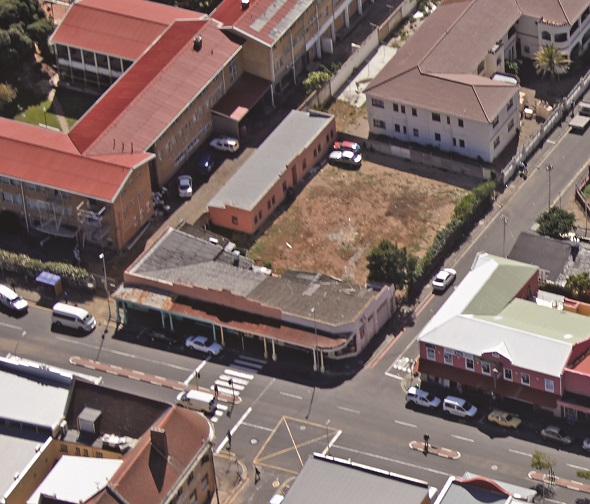 Seen aerially, 116 Main Road is the 1360m2 site, situated in the midst of the popular ‘student corridor’ and would lend itself to a large scale mixed use development aimed at that lucrative market

116 Main Road intersects with Station Road and has been largely demolished which allows for the prospective investor to acquire an opportunity in the beginning phases of redevelopment and which holds the benefit of pre-approved plans for a medium size venture. “These plans do not unlock the full potential of this large site but do give an indication of what one may consider. Large scale developers would take a more ambitious view and aim for that full potential that this property lends itself to” says Perling. The property currently accommodates several tenants who are in occupation on a month to month basis and which Perling feels would be advantageous to developers whilst making their necessary provisions.

The property is located adjacent to a large apartment block at 20 Station Road which was sold for R14.5million by the Group in 2012. “There are many businesses and residential accommodation properties in the area which take advantage of the lucrative student sector and with its proximity to major transport links and ease of access to the places of study and the City, this opportunity which is possibly one of the last in this corridor, is prime for that market” adds Perling.

The Western Cape continues to be an ideal choice for study by learners from both South Africa and abroad and Mowbray continues to be a node associated with the major institutions and their students.
116 Main Road may be viewed by appointment and will be auctioned at the Radisson Hotel on Tuesday, April 30 at 12:30. For information contact Farrell Perling on 021 425 8822 or visit www.claremart.co.za