Rawson Developers’ new R45 million, four-level Stellenbosch development, “The Acorns”, which will have 42 apartments when complete – and which is on a 2200 m2 site between Hoffman and Dennesig streets, was officially re-launched on 6th April 2013.

An artist’s impression of the rear view of “The Acorns”.

Paul Henry, Managing Director of Rawson Developers, said that there had been planning approval delays as a result of the removal of title deed restrictions but this matter has now been resolved.

“To date”, he said, “word of mouth publicity on this new scheme has already resulted in 23 of the units being sold and we now expect a full sell-out by June 2013”

As the complex is L-shaped, its units will face north-east and south-west. All units will have one bedroom, an open-plan living area, a dining space, a kitchen and a bathroom with a shower. The counter and work tops will be polished granite and the window frames will be aluminium. All units will also have small balconies, large enough for a table and two chairs and each will have a dedicated parking bay in the complex’s security area. Each floor also has its own braai and recreational area. 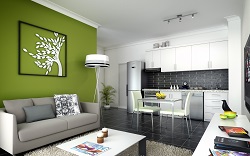 An artist’s impression of the interior of an apartment at “The Acorns”.

“A feature of the new development, which possibly makes it unique among Stellenbosch’s student apartments, is that it will be fully compliant with the provisions and rulings stipulated by the municipality for disabled people. This means that lifts will give access to all floors, all stairways will be complemented by ramps and the kitchens and bathrooms will be configured for use by people in wheelchairs.”

The façade of the building will be elegant and add value to all homes in the area, says Henry.

“It is definitely a step up on anything they have seen in this industry up until now.”