Propertuity and Pam Golding Properties (PGP) have announced that they have entered into a strategic partnership in which PGP will not only market residential accommodation in one of Johannesburg’s most vibrant and trendy precincts, Maboneng, but it will also provide strategic guidance and advice. The alliance has been heralded as one of the most important recent developments in the residential property market in the city of Johannesburg. 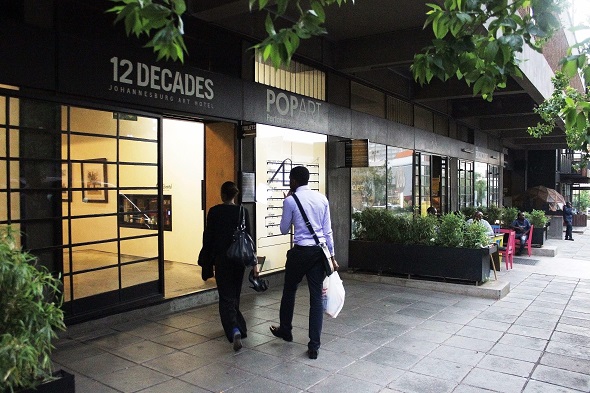 “PGP is delighted to be involved in the visionary Maboneng Precinct,” says Dr Andrew Golding, chief executive of PGP. “We have been very interested in the rejuvenation of the inner city for some time, a key development node in which we plan to become increasingly involved. We have been looking to partner with appropriate developers in this area for several years now and are extremely pleased to have formed an alliance with Propertuity, the renowned development arm of Maboneng.”

Dr Golding continues: “The Maboneng Precinct is the most sustainable and ambitious private development initiative taking place in the Johannesburg city centre today. The project is encouraging impressive economic growth and social cohesion in the area. It is also growing at a phenomenal rate. While the precinct currently involves around one square kilometre on the eastern fringe of Johannesburg’s inner city and no fewer than 32 buildings, the developers have enormous vision and are constantly looking for opportunities for further development beyond the current boundaries of the project.”

Propertuity’s CEO and founder Jonathan Liebmann says PGP will be an invaluable partner going forward, providing advice on development, marketing, pricing and project management. The involvement of Pam Golding Properties in the marketing of residential property within the precinct is a major coup for Maboneng that lends further integrity to this project. PGP’s vision of recreating urban culture aligns with Propertuity and the two are a ‘natural fit’. These were among the reasons why Propertuity decided to approach Dr Golding and explore whether it would be possible to bring PGP aboard as a strategic partner,” he adds.

PGP Hyde Park joint area manager, Rupert Finnemore, points out that from a strategic point of view PGP has the capacity, knowledge and experience to handle this project. The same team that has handled such projects as Melrose Arch and the Houghton will assist with Maboneng, which are similar in their mixed-use lifestyle offering. Maboneng, however, offers something completely different in that it is an urban community with a variety of offerings for mixed income groups. Its highly experienced agents who sell properties in the Johannesburg city centre will also be employed and will use their extensive databases of buyers to maximise sales opportunities. An onsite office will be developed with display material aimed at communicating the unique character of the development.

Maboneng is the brainchild of Propertuity, which was founded by Liebmann. Seeking to encourage the artistic and entrepreneurial spirit, he purchased the DF Corlett construction offices and warehouses to create Arts on Main, a centre of artist studios, galleries, retail outlets, office spaces and restaurants. During the construction Liebmann began to acquire a much broader vision for the area, seeing not just a creative and entrepreneurial centre but an entire community of enlightened individuals. The concept of the Maboneng, which means “place of light” in Sesotho, was born.

Liebmann says Maboneng has involved the creative use of vacant industrial buildings to establish a mixed-use precinct consisting of residential, retail and office space. It is expected that there will be a total of 40 buildings transferred to the project by the end of 2013. Of the 32 buildings that have already been transferred, not all have yet been earmarked as office, retail or residential space.

Some 700 owners or tenants currently reside in three residential buildings called Main Street Life, Revolution House and Arts on Main, which have either been completed or are still under construction.  A fourth building named Artisan Lofts is under heavy construction. It is envisaged that the precinct will be home to approximately 3000 people within the next five years. Five new developments will be launched in 2013, some largely residential, but all with a retail component on the ground floor, adding further to the lifestyle spaces that already give the neighbourhood dynamic flavour. No less than 60% of the properties that are available have already been sold. Many of these were purchased off plan.

According to Liebmann, Propertuity refurbishes existing buildings rather than builds them. “This is largely because we want to keep the character of both the area and each individual building that makes up the area,” he observes. “It also makes financial sense for us to work with an existing structure rather than start anew, this allows us to offer competitively priced property to our buyers ”

“Each development is unique and inspired by its original architectural language. The idea is to construct a neighbourhood identity and create a strong community, while at the same time ultimately totally re-energising this part of Johannesburg.”

According to Liebmann, there has been an increased appetite from investors for low risk inner city property in recent years. “Foreign individuals who are enjoying the unique urban lifestyle offered by the precinct or those, such as banking executives who are recognising the great investment potential offered by owning apartments there, are all snapping up properties,” he notes. “The available apartments range in price from between R390 000 to approximately R2 million for a luxury penthouse.”

It is interesting to note just how ambitious the developers are: they are already looking north towards Ellis Park for further expansion opportunities over the next five to ten years. Liebmann says plans to expand the University of Johannesburg’s campus are also likely to be a boon to development in the area.

Another good sign for the Maboneng Precinct is that retail and office spaces are mushrooming giving an indication of just how quickly development is taking place in the area. While there are currently around 100 commercial interests in Maboneng, this number is expected to rise to 1000 within just a couple of years.

“Those who are residing in Maboneng appreciate its centrality, situated as it is close to the Johannesburg CBD and the banking district,” says PGP Hyde Park joint area manager, Jonathan Davies. “It is also not far from the new Gautrain Park station and residents are able to take advantage of the Rea Vaya Bus Rapid Transit System, which provides a fast, safe and affordable bus service in the city. In addition, the precinct’s Mabogo Shuttle provides transport between Gautrain Park station and the Maboneng Precinct daily.”

The developers are making the area more pedestrian friendly and is working to have certain streets closed to traffic for the exclusive use of pedestrians. Cycling lanes are also being developed within the precinct. The security in the area is impressive with constant street patrols being undertaken by security personnel. Each of the apartment blocks will furthermore offer secure parking and biometric access.

Only three penthouses are still available for sale at Revolution House and these are on the market from between R1.2 million and R1.5 million. The Arts on Main residential section was originally constructed in 1905 and now has two revamped 120sqm apartments on sale for R1.2 million each.

Main Street Life, where 200 units have sold, still has 40 available from between R380 000 to R660 000. These apartments are well designed offering affordable living in single, double or penthouse units with wonderful views of the city. Rooftop facilities include a boxing gym, restaurant and bar. Residents share their building with ground floor exhibition space, restaurants, an independent cinema and theatre.

As noted above, Artisan Lofts is under heavy construction and 42 high-end units ranging in size from between 32sqm to 100sqm are available for sale. Most are north facing bachelor and executive open plan apartments with wrap around views.

“PGP’s involvement will be over the long term, between five to ten years, and we believe we will add significant value to this exciting and innovative development during that time,” concludes Finnemore.