Across asset classes, 2012 was the year of strong equity performance, with the MSCI World Index posting a local currency return of over 15% for the year as a whole. Real estate securities markets posted even stronger performance, at over 20% for most major markets. 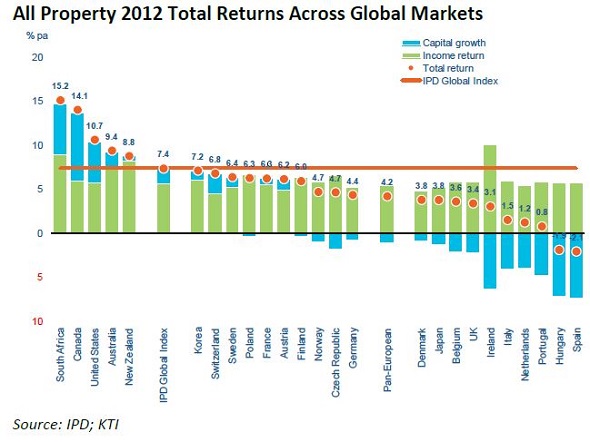 The performance of the direct real estate market, announced in April at the IPD Global and Pan-European Annual Property Indices launch, showed a slowing of momentum but, due to the relatively high income return, still positive performance of 7.4% for the year as a whole.

Although slowing during 2012, this is the third year of relatively strong performance across the major global real estate markets since the downturn of 2008/9. Peter Hobbs, IPD Senior Director, said, “Unlike other crises, such as Japan in the early 1990’s, investors have not turned their backs on real estate but have instead sought to gain greater access to the asset classes. Real estate remains the favoured alternative asset class, due to its strong relative performance, high income yield, and substantial diversification benefits for multi-asset portfolios.”

Pierre Cherki, Head of Alternatives and Real Assets, Deutsche Asset and Wealth Management confirmed this trend by saying, “We are seeing continued, sustained, interest in cross-border real estate investing with experienced global investors in Germany, the US and Canada, being joined by a wave of new investors from Asia, the Middle East and Europe, seeking exposure to real estate across global markets.”

As usual, there are significant variations across markets, with Canada, South Africa and the US continuing to lead performance, with double digit returns for the year as a whole. At the other extreme, fifteen markets experienced value declines during 2012, all of which, with the exception of Japan, were in Europe. The most significant value declines were in Spain (-7.4%) and Hungary (-7.2%), with the relatively strong income returns in the other markets meaning that total returns remained positive for the year as a whole.

There is almost as much variation within countries as between them, with the divergence between top and bottom performing US cities (nearly 1,200 bp) even greater than last year, and significant variations in other countries, particularly the UK and Canada. As for the previous year, it has tended to be the dominant commodity rich (Calgary and Perth) and financial/technology (London and San Francisco) cities that have posted the strongest performance in each of their markets.

The wide divergence across markets has big implications for investors and managers with global real estate exposure. The relatively weak European markets have been a negative drag on performance although even here there were marked differences between the better performing Northern markets of Sweden, Finland, Poland and Switzerland, and the Southern European markets. Heavy exposure to the North American, South African and Australian markets would, in contrast, have been likely to boost performance.

Despite these variations and the weakness across a number of markets, global real estate seems well-placed, certainly in the near term. Values across the globe are still some distance from their pre-crash peak, having rebounded only by 9%, after falling over 20% in 2008/9. Income yields also remain attractive in most markets, and new supply remains muted. The overall prospects for the global index will continue to be strongly influenced by the two largest markets of the US and Japan that represent over half of the index by market value. Given the cyclical nature of real estate there is the prospect of a narrowing of the recent divergence in performance of the two countries (US returns averaging 13% a year and Japan at less than 3% over the past three years) with Sabina Kalyan, Global Research Director, CBRE Global Investors, saying, “While the 2012 results showed the continued outperformance of the US, it will be fascinating to see if 2013 is the year when Japan finally moves from being a drag to a driver of growth as Abenomics spurs confidence and occupier demand”.