Irene area in boom times as 500 000 square metres of bulk are about to be developed for mixed-use property development.

A number of leading property developers are squaring up to develop approximately 500 000 square metres of bulk in the greater Irene area, which have now been approved, and is earmarked for phased development, said Org Geldenhuys, managing director of property management and development company, Abacus DIVISIONS.

The development is named Irene Central and once developed total investment costs should be around R10 billion.

Abacus DIVISIONS is the main marketer of the R2 billion Route 21 Corporate Park office park- the largest business and office park in the greater Irene area.

Geldenhuys said approximately 140 hectares in this area have been earmarked for mixed use development. These development rights are sanctioned for offices, business rights, industrial, residential, hotel, entertainment and shopping rights.

“There are eight extensions in the Irene Central development area, where the approximately 500 000 square metres have been earmarked for development. In terms of the height of structures, rights have been approved for buildings ranging from two stories to 10 stories – depending on the area.

“The main property developer in the area – Irene Land Corporation – will tackle the release of these land parcels in a managed, and phased, manner.

“The greater Irene area,” said Geldenhuys, “is now poised for significant growth and is destined to become an important business hub in the Pretoria area. In fact, it will be the next big business growth hub of Centurion.”

Commenting further, he said one of the “spurring points” to the “development interest” has been the long-awaited upgrade to the Nellmapius bridge over the R21 highway, currently being done by Irene Land Corporation.

“Additionally, a reservoir has been built by the Tshwane (Pretoria) Metropolitan council in the area that will handle an estimated 15 million cubic litres of water to service the business area, and a suburban area that is going to mushroom due to these business growth levels.

There have been extensive telecommunications upgrades as well, with both Telkom and fibre specialist, Dark Fibre Africa, laying a sophisticated fibre network in the area that will provide companies – and users – with leading edge telecommunications capabilities and access to true broadband services.

There has also been a significant electricity upgrades in the area as the result of the erection of a new electricity sub-station in anticipation for the coming growth.

“There might have been a global economic meltdown precipitated by the reckless lending primarily of USA banks- and of course badly indebted countries like Greece – but here in Irene we are seeing things explode. We believe the Route 21 Corporate Park – which is now almost completely developed – is going to be a central point of this business explosion. We are facing exciting times here in the greater Irena area and it shows that Africa, including SA, escaped the massive worldwide credit crunch to a large degree.”

Although the new development is still to be officially launched, almost all 20 stands have already been pre-sold.

Geldenhuys believes this all points to “a vibrant market in the Irene area”.

“We have come through the worst of the recession and perhaps we can now look forward an increase in business confidence – and some real growth.” 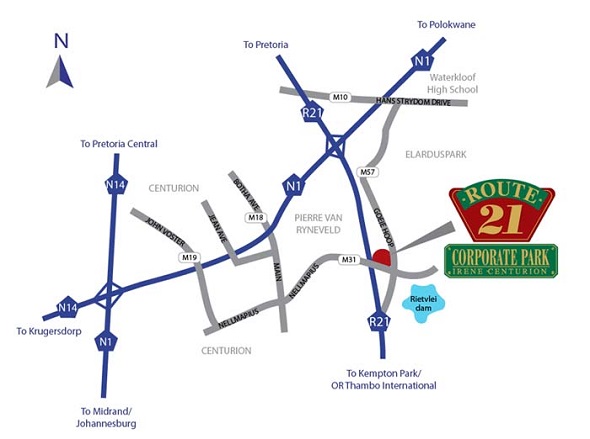 Abacus DIVISIONS is the main marketer of the R2 billion Route 21 Corporate Park office park- the largest business and office park in the greater Irene area.