Vodacom has today unveiled what it says is the largest solar array of panels on a single building in Africa at its offices in Century City, Cape Town. 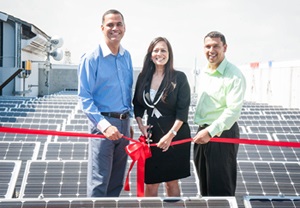 The installation of the solar array is part of Vodacom’s ongoing drive to help reduce the amount of energy the company consumes.

The solar array is expected to provide up to 75% of all electricity power required by the building during peak production.
The electricity produced will feed into the two main distribution boards and a display panel, installed in the reception area of the building, and will display instantaneous power produced (yield), energy yield and carbon emission savings.

Vodacom’s Chief Officer: Corporate Affairs, Maya Makanjee says: “Vodacom recently became a voluntary signatory to the Energy Efficiency Leadership Network which aims to help improve energy efficiency in South Africa.
This commitment complements our existing environmental and sustainability efforts to reduce carbon emissions within the organisation by 5% per annum until 2014.”

“Through this particular project Vodacom aims to demonstrate that business can take the lead in promoting renewable energy solutions, thereby stimulating the green economy,” Makanjee says.

As part of Vodacom’s commitment to socio-economic development local Small, Medium and Microenterprises (SMMEs) were appointed to install the solar panels and do the construction work required. The appointment of local SMMEs also provided the opportunity for skills transfer due to the scale of the project and the limited number of skilled technicians that were available to complete the task.

Vodacom also made it a prerequisite for product suppliers to provide training on the technical elements of the installation, resulting in a German engineer providing on-the-job training to locals.

In keeping with Vodacom’s commitment to investment in local communities, all the roof tiles that were removed were donated to a community centre project in the Delft area, ensuring that the roof tiles were re-used.

The project is expected to assist the Group with savings on utility bills and help improve energy efficiency.
To date, Vodacom has reduced the energy inputs per base station across the Vodacom Group by retrofitting base stations with free cooling, thereby making them more energy efficient.

“Through this initiative and other innovative energy saving projects, Vodacom intends taking the lead in trying to reduce dependency on conventional energy sources, and it is our hope that other companies follow suit.
We also want our customers to learn from our example and to become more aware of their own carbon footprint,” says Makanjee.