At the 2013 Stars Convention held at Sun City during February, RE/MAX of Southern Africa Broker/Owners and agents had the opportunity to gain insight into other RE/MAX offices and their property markets from around the world. 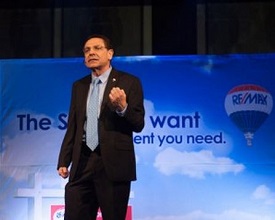 International guests at this year’s convention included Regional Owner of RE/MAX Israel, Bernard Raskin. Zimbabwean-born Raskin impressed delegates with his Afrikaans abilities, along with the fact that Israel never really experienced the tailspin effects of the current recession that many countries did.

Instead, property in Israel continued to grow from strength to strength, according to Raskin who says that the demand for property in Israel is currently outstripping supply. This is despite the fact that mortgage finance in Israel is hard to get, with 65% finance the maximum that banks will even consider loaning on property. Raskin said that this is one of the main reasons why Israel fared well throughout the recession, as the banks didn’t have a lot of bad debt.

Buyers in Israel, he said, cover a wide demographic of people, from first time buyers to those upgrading their properties to suit their family requirements and to those downscaling closer to retirement. According to Raskin, first time buyers make up about 35% of the market, with three to four-bedroom apartments close to economic hubs being the most sought after property.

“There is generally a shortage of stock,” said Raskin, “although more and more building is taking place outside of Tel Aviv, where property is expensive. Good properties in surrounding areas within a commutable distance to the city centre are more affordable, with properties priced between US$250 000 and US$300 000 the most active.”

Raskin says that as it is a small country with a limited supply of land, real estate is generally expensive. In general, Raskin says that at the lower end of the market, property is priced at around US$200 000 on average, with mid level properties hitting the US$300 000 mark on average, while the top end homes can range around US$1million or more, depending on the location.

Talking to the RE/MAX of Southern Africa Broker/Owner and sales associates at the convention held in February, Raskin said that while the economy in Israel is slowing down, in light of global market conditions, he still expects the property market to see around 5% growth in the year ahead. “We have low interest rates and low inflation of below 2% which is assisting in making mortgages more affordable. Currently around 35% of a property investment is cash with parents providing a good part of this, while the balance is financed through mortgages.”

Comparing Israeli property trends to South Africa, Adrian Goslett, CEO of RE/MAX of Southern Africa, says that while property in South Africa is perhaps more affordable, only around 50% of all mortgage applications are currently being approved by the banks. “While first time buyers make up less than 25% of the South African buyer profile,” Goslett says, “many buyers in the current market are also relying on their parents to assist them financially in the home buying process, especially with the deposit required in order to qualify for a home loan.”