With production levels down by some 50 percent in Spain and South African consumption up by approximately 20 percent, the South African olive industry is starting to show signs of promising potential, says Wayne Rubidge, Pam Golding Properties manager in the Karoo. “In fact, olive farming is one of the fasted growing activities in South Africa’s agricultural sector.”

He says while the anticipated import tariffs are likely to boost local production, the current demand for South African oil from foreign markets is starting to grow based on import replacement due to low European production, coupled with the fact that South Africa produces some of the world’s best quality olive oil. The South African Olive Industry Association represents the interests of olive growers, olive oil producers, table olive producers and olive tree nurseries.

Comments Rubidge: “About 68 percent of South Africa’s olive consumption comes from mostly inferior European products, and with the general world shortage, the olive index is up by a massive 50 percent. The primary olive producing areas in South Africa are in the Western Cape’s Karoo region, with its Mediterranean climate. Apart from traditionally being known for producing wine, fruit and livestock, this region has a favourable climate and growing conditions for olives, which prefer the winter rainfall of the Cape and the dry conditions of the Karoo. The dry summer conditions aid the ripening of the fruit, and water is supplied to the trees via drip irrigation systems.”

He says olive oil is very different from vegetable oils in that it can be consumed in its natural state. “Of all the types of olive oil the best by far is the Cold Extracted Extra Virgin Olive Oil, which has the full flavour as well as all the healthy attributes. As olive oil contains high levels of monounsaturated fats it assists in cholesterol balance, and with high levels of polyphenols, it is a strong antioxidant used to fight free radicals linked to various cancer related diseases. In addition, olive oil has high levels of vitamin E, A, D and K and is one of world’s oldest foods and medicines. (Information regarding health benefits courtesy of SA Olive Industry Association www.saolive.co.za).

“Like wine, good quality olive oil is defined by its chemical and physical properties as well as its taste and fragrance. So different types of extra virgin olive oil have different characteristics and are complemented by various food combinations. Generally, olive oil has a shelf life of 24 months from date of harvest, should be stored in a cool dark place and should not be exposed to oxygen as oxidisation take place rapidly and spoils the oil.”

Rubidge says there is a wide range of types of olive farms which are best categorised as commercial olive production farms, boutique olive farms or lifestyle olive farms. The latter category generally has less than around 5 000 trees and growers either pickle their own olives or send raw olives to a larger producer who has the equipment – namely an olive press – to produce oil. The first olives were produced by Jan van Riebeeck at Boschheuwel in 1661 and it was about 200 years later that the first commercial olives were seen in South Africa.

“In contrast to traditional olive oil consuming countries where per capita consumption of olive oil ranges between 12 to 36 litres, the average South African consumes a mere 80 ml (0.08 litres) per annum. This highlights the tremendous opportunity for growth and expansion in this country. The total South African consumption is approximately 6.5 million litres, of which local production is currently less than 32 percent. Extra virgin olive oil (EVOO) constitutes more than 50 percent of imports. Local production is solely extra virgin at present. Local production of table olives is estimated at 3 000 tonnes per annum while 2 000 tonnes are imported annually (40 percent). Considering these statistics, there is no doubt that this farming sector offers significant potential for growth,” says Rubidge. 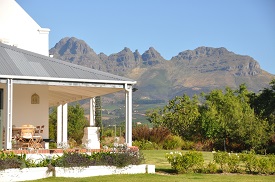 This olive farm is set on 23 hectares between Stellenbosch and Somerset West.

Given the sound potential for investment Pam Golding Properties (PGP) has identified a number of olive farms which are ideal for an increasing number of investors who are enquiring about properties that produce olives in the various categories. Currently on the market through PGP are various sizes of lifestyle and boutique olive farms in a range of farming areas in the Western Cape. Located between Stellenbosch and Somerset West in the Western Cape’s Boland region is a magnificent 23 hectare olive farm with manor house, 20 cottages and 20 metre lap pool – all with uninterrupted views over the Simonsberg and Heidelberg Mountains to Table Mountain. This farm is marketed at R17.5 million.

In Franschhoek, an award-winning 19 hectare olive farm with five hectares of olives and 1.4 ha of vineyards (port) plus a spectacular five bedroom Provencal stone clad villa and magnificent elevated views of the Franschhoek valley is priced at R29 million.

This exquisite 19 hectare olive farm in Franschhoek includes a spectacular five bedroom Provencal stone-clad villa and is set in an elevated mountainside position.

Adds Rubidge: “In addition, available on request for the serious farmer are some of the highest potential olive farms that have in excess of 15 000 trees or produce in excess of 30 000 litres of olive oil. Exclusively available through PGP and located in the Western Cape are two of the most exciting commercial olive farms South Africa has to offer. The first estate produces some of the best oil in South Africa, comparable to the best in the world with huge future potential in the export market the property and business is on the market for R26 million.”

For further information on these properties or other opportunities in the olive farming industry contact Wayne Rubidge of Pam Golding Properties on 082 432 9364 or 049 8923495 or email karoo@pamgolding.co.za.