Recognised as the economic hub of the Eastern Cape, Port Elizabeth’s strategic position is strengthened by increasing activity in and around Coega, which augurs well for future growth in the residential property market and is already resulting in numerous enquiries for rental accommodation, says Ian Olivier, well-known, local real estate specialist who has joined Pam Golding Properties and is now the company’s area principal for Port Elizabeth. 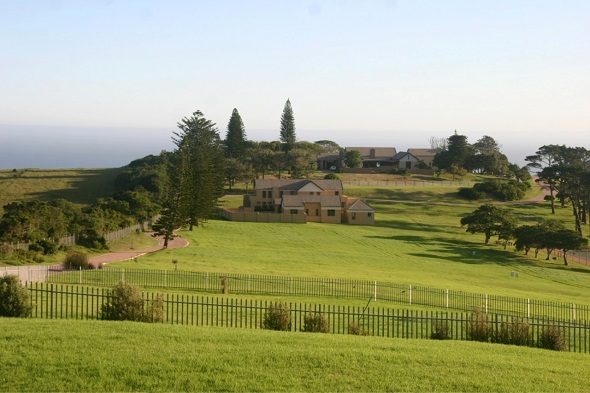 Priced at R15.95 million this two hectare property forms part of a 15 hectare private residential estate situated just five minutes outside Port Elizabeth. In prime position to enjoy spectacular views of the coastline and Indian Ocean, the home is designed and built in a contemporary South African farmhouse style

Olivier has been in the property industry for the past 24 years, most of which were as principal of his own real estate company, Ian Olivier Properties. He was also chairman of the Institute of Estate Agents South Eastern Cape in 2011 and has been on numerous real estate boards over the years, including the Services SETA and MLS (Multiple Listing Service), and is currently a board member of REBOSA (Real Estate Business Owners of South Africa).

As a result of the merger of the existing Pam Golding Properties (PGP) office and Ian Olivier Properties, the expanded PGP business now operates from new, larger premises at 157 Cape Road, Mill Park in Port Elizabeth. Says Olivier: “New agents will be taken on as we extend our reach into new areas such as KwaDwesi and KwaMagxi, which lie north of the city centre. We currently provide residential and commercial sales and letting services throughout the entire Port Elizabeth area including the beachfront, Central, Mill Park, Walmer, Summerstrand, Lorraine, Westering and Lovemore Heights, among others.”

Says Olivier: “The housing market in Port Elizabeth is definitely more active than last year. Enquiries from buyers has increased and we are seeing good show house attendance for correctly priced homes in all price brackets – some of which are even selling within hours of listing. Buyer interest remains mainly for primary residences among those upgrading to better homes or areas, those downscaling in size and rising interest from first-time buyers. As the economy improves we anticipate the market will experience further activity.

“While most of our home buyers are locals, we also receive enquiries from those relocating here from other centres for a variety of reasons including a better lifestyle, business transfers and retirement. It’s not unusual to find families moving from the larger cities to Port Elizabeth for a way of life, with the breadwinner then commuting on business. This appears to be a growing trend, particularly among those working in Johannesburg who then travel to work each week and return to family life on weekends. An attractive coastal lifestyle and reduced crime are key factors influencing purchase decisions. This is especially evident among middle to upmarket buyers seeking family homes in the sought after suburbs – either to purchase or rent,” he says.

Olivier says good value for money currently available includes well-priced, two bedroom apartments with secure parking selling for R650 000 (without a sea view) and for R950 000 and upwards (with a sea view). “These are ideal options for parents of university students, retirees and investors, who can expect rental returns of up to R6 000 depending on the address. Larger, more luxurious apartments priced from around R1 million to R10 million plus tend to be acquired by end users.

“In regard to the rental market, we are seeing a consistently good demand for properties particularly in the lower to middle price ranges. There are currently sound opportunities for those who embrace property as a long term investment – with long term capital growth coupled with healthy short term yields. The price range presently most in demand among tenants is between R5 000 and R8 000 per month, with the highest demand for townhouses, mostly from families.”

He says others wishing to rent are young people not yet able to afford to buy a home and families who prefer to rent before buying, while there is also a high demand for student accommodation as the Nelson Mandela Metropolitan University is situated in Summerstrand, one of the city’s prime suburbs.

Olivier says ‘PE’ as it’s commonly known, has always been something of a ‘best kept secret’. “Until people visit they may not realise the good value for money available in the residential property market or the range of suburbs and properties. The market caters for all tastes, lifestyles and budgets, whether you want to be in the centre of things or out in the country. Driving distances between suburbs and traffic volumes are significantly less than those in the bigger cities. Everything is within a short driving distance whether the city centre, business hubs, beach, great schools, university, malls or the countryside. Here you can also see the Big Five within 40 minutes of the city. Contrary to popular belief, PE is far from being the country’s windiest city, however, its other moniker as the friendliest city certainly is true.”

Residential property in Port Elizabeth ranges from entry level flats in the more central areas priced at around R450 000 for an apartment, and a basic three bedroom house in various suburbs starting from around R700 000, to an average four bedroom house in a good area from approximately R1.2 million to top end luxury townhouses, mansions and seafront apartments priced well into the millions.

Olivier says in addition to new infrastructural developments in the pipeline for the area, including initiatives in rail, dams, roads and schools – which will have positive spinoffs for the local economy and housing market, PGP is seeing an increase in enquiries from developers looking for land both for commercial and entry level residential property development.

He says in addition, construction of the new Baywest development just 10km from the Port Elizabeth CBD will create a new urban node and metropolitan gateway at the western entrance to the city. Baywest aims to change the face of shopping and lifestyle in the Eastern Cape by creating a design that will blend a retail component with a strong sense of community, with carefully landscaped green areas and top priority security. The first phase is the retail mall, Baywest Mall, which is already under way and anticipated for completion in October 2014 and the rest of the development, which will include residential nodes, office parks, schools, hospital, lifestyle centre and hotel component, is envisaged for completion within the next 15 years. Every effort will be made to impact as minimally as possible on the environment by making the most economical use of space, geography and other immediate natural surroundings.

Comments Sisa Ngebulana, executive chairman of the specialist property investors Billion Group: ”The vision behind Baywest is to create a safe haven where people can live freely. Residents must be able to stroll with their children, walk their dogs in the parks and push their prams from their homes in the development to the open air boulevard and the mall. It offers a whole new way of living in a pedestrian-friendly setup.”