February 2013 saw year-on-year growth in the average value of homes in the middle segment of the South African housing rising further. This was largely the result of the base effect of slowing house price growth as well as price deflation in one segment of the market twelve months ago. However, monthly price growth is still on a declining trend, which will most likely cause year-on-year price growth to moderate later this year. These trends are according to the Absa house price indices, which are based on applications for mortgage finance received and approved by the bank in respect of middle-segment small, medium-sized and large homes.ABSA House Price Index Feb 2013 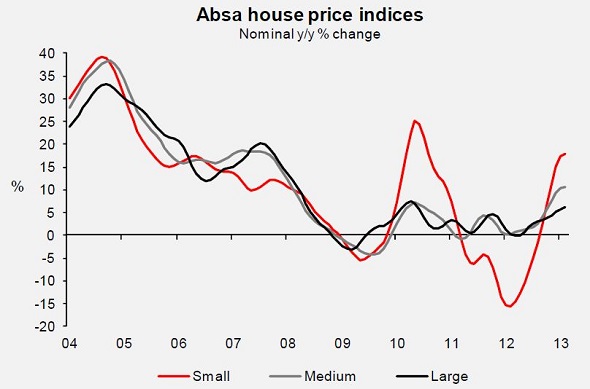 The average nominal value of homes in each of the three middle-segment categories was as follows in February 2013:

While inflationary pressures persist, headline consumer price inflation, at 5,4% y/y in January this year, remained below the 3%-6% target range. The rand exchange rate depreciated to above R9 per US dollar in the first week of March, while fuel prices were hiked further earlier this month. These factors will be considered by the Reserve Bank’s Monetary Policy Committee when meeting later this month to decide on monetary policy.
Relatively subdued real economic growth of around 1,6% was recorded in the second half of 2012 as a result of global economic trends and the effect of labour market instability in various sectors of the economy. This brought growth to a real 2,5% in 2012, down from 3,5% in 2011.
The economy is forecast to grow by a real 2,8% in 2013.