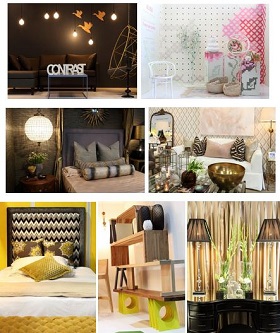 With the overall theme of “Bliss” inspiring the look and feel of the show, the focus on this year’s Decorex Durban was on giving visitors ideas for turning their homes into a sanctuary – or finding their own blissful space within their home. In a world where we are increasingly overwhelmed by too much information and communication, Decorex Durban was designed to be a blissful escape into a world of beauty and style.

Winners of the most beautiful stands at Decorex Durban were announced on Friday night. The Best Overall stand was Neolith, the Most Interactive stand was Eskom, Urban Lace and Goodwood collaborated to be named Best Newcomers, Real Natural Stone won the Best in Fine Finishes, and Crestwood Kitchens was named best Kitchen and Bathroom. Other winners were: Best Green product – Quirky, Best Décor – Lisa Walters, Best Use of Colour – House of Soul, Best Small Stand – Slinx.

A highlight of Decorex Durban was undoubtedly the unique Plascon trends installation by Laurence Brick Creative Direction who’s “One room, four looks” colour makeover gave visitors unique and useful colour inspiration for 2013. Through the simple application of different paint colours, the identical room was transformed four times over. Plascon colour manager Anne Roselt praised the Decorex Durban team for putting together what she believed was the prettiest show to date.

Decorex Durban media partner M-Net in partnership with homeware retailer Mr Price Home, created the M-Net Cares Room to Grow by Mr Price Home installation, where visitors were given ideas for children’s rooms and décor inspiration – from a baby’s nursery, toddlers play area to teens escape. Following the show, all items from Mr Price Home featured in this installation – as well as much more – will be donated to a local underprivileged children’s home, Makaphutu, supporting the resident kids’ growth needs.

One of the most popular features of Decorex Durban this year was the Volvo #MADEFORYOU Designer Pods, constructed by DuroBuild. Four of the city’s leading designers were invited to drive a Volvo for a weekend and design a space inspired by their driving experience. Designers participating in the Volvo #MADEFORYOU Designer Pods were Che Hooper of Portfolio Design, Bianca Shaw of Slinx, Jennifer Jones of Jennifer Jones Interiors and Dale Dennis of Ground Floor Interiors.

Other designer draw cards were the installations by award-winning South African stylist and interior designer Tracy Lee Lynch, who used the cross stitch trend combined with heritage references to create the stunning entrance feature to Decorex Durban 2013. Another local talent, Lisa Walters was the honored invitee for the Decorex Designer Spotlight and seduced the crowds with her serene sitting room in a feminine colour palette of brown, white, gold and touches of ballerina pink.

And what would Decorex Durban be without its legendary food feast – this time featuring some of KZN’s leading organic and artisanal food producers. The Fresh Market was a firm favourite, offering everything from German sausages to craft beer and Indian vegetarian food. The Distell Fine Brandy by Design Cellar was also a hit with visitors, serving sophisticated brandy cocktails. And a day full of décor inspiration was rounded off with a perfect cup of coffee from Vida e Cafezinho.

Decorex SA’s Conversations on Architecture speaker conference was given a new look this year in the form of a roadshow and took place in Durban, Cape Town and Johannesburg over a period of one week. Sponsored by Caesarstone, this highly sought after architectural conference was once again convened by well-known Johannesburg architect Hugh Fraser and each city played host to the three top international architects, joined in each city by three local speakers. The international speakers were Alex de Rijke, Dean of Architecture and Interiors at the Royal College of Art in London, award-winning Paraguayan architect Solano Benitez and German architect Jorg Leeser.

Sian Steyn, Decorex SA General Manager of Exhibitions and Events said that Decorex Durban 2013 had been a resounding success, proving once more that décor savvy Durbanites had great style and taste.