If Human Settlements Minister Tokyo Sexwale is turning to the private sector to help find a solution to the 2,2-million backlog in toilet delivery in rural and semi-urban communities, it is in the area of alternative building technologies (ABTs) that he should look hardest. 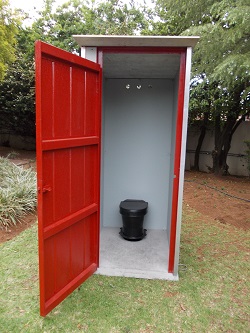 This is the view of Brent Harris, the founder and CEO of Vela Building Solutions, which has developed an efficient alternative – in terms of cost, time, skills and durability – to the corrugated iron and pre-cast concrete panels currently widely used for community toilet construction.

Welcoming the news that Minister Sexwale has instructed that private sector companies be brought in to help, Harris says: “Eliminating a backlog of 2,2-million toilets cannot be fast-tracked by use of conventional building methods alone.

“Not only that. If you factor in the urgent need for the provision of new and replacement toilets for hundreds of mud brick and other schools around the country (which is a Basic Education, rather than Human Settlements, problem) the challenge to Government is even greater,” he adds.

He says Vela has come up with a solution that is being increasingly specified by Government-appointed contractors.

“The Vela Toilet Solution consists of an ultra light and thermally efficient, fully ventilated, toilet structure that is suitable for both pit and waterborne systems and can be assembled on a concrete slab either in stand-alone or multi-unit format, says Harris.

The factory-produced panels for the structures consist of fibre cement boards with polyurethane infill sandwiched between them. Enough panels for 90 toilets can be delivered, flat-packed, by a single truck unit. Each unit can then be assembled on-site in 40 minutes by unskilled labour (including women) without electric tools.

The new toilet product adds another dimension to the activities of Vela Building Solutions. The company is a national provider of ABTs construction products and systems for small and large-scale housing projects; relocatable emergency dwelling units; more liveable accommodation for informal settlers; and other community infrastructure – such as schools, crèches, and clinics.