Globally, following the circumnavigation of the ‘fiscal cliff’ in the USA (at least for now), and some relief in the Eurozone countries, investor confidence has brightened – albeit cautiously, says Elwyn Schenk, Pam Golding Properties area principal in the uMhlanga and Umdloti areas of the KwaZulu-Natal north coast. 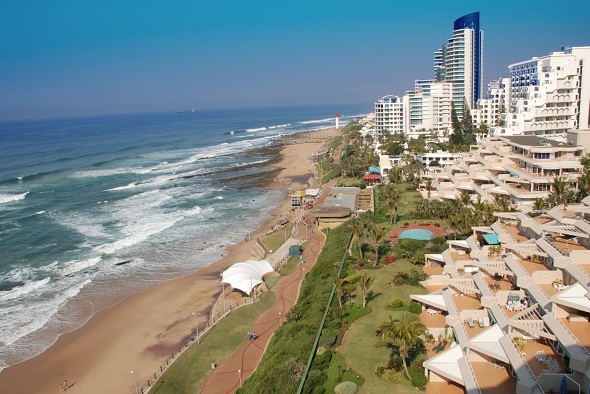 “Property has always been a resilient asset class and locally, a confluence of several positive factors has made uMhlanga relatively resilient during the lean years of 2007 to 2010, and also able to respond quicker to the somewhat better international and local economic climate,” he says.

“Umhlanga’s location is a key factor contributing to its demand among home buyers, whether for primary, investment or even leisure use. It’s centrally placed relative to Durban central, King Shaka International Airport and the fast-growing business districts of Gateway Newtown and uMhlanga and La Lucia Ridge. It enjoys a relaxed village atmosphere with a vibrant restaurant and night life, but is only five minutes away from Gateway shopping centre, which is of world-class standard. Add to this a highly appealing lifestyle, sub-tropical climate, and a clean, green and secure environment – with the uMhlanga Urban Improvement Precinct making a considerable impact, all of which ultimately is favourable for property values.”

Schenk says the property market in the uMhlanga and Umdloti/King Shaka nodes continues to be favoured by homeowners and investors alike not only for its quality and safe lifestyle but also due to the sound capital appreciation achieved in the residential market. For the investor this is coupled with good rental yields (ungeared) of approximately five percent after rates and levies, with the potential for strong rental escalation given the acute shortage of quality rental stock.

Currently the most sought after units in the uMhlanga area are in the price range from R900 000 to around R3 million, however the demand is across a wide spectrum. These include starter apartments in Gateway priced from R900 000 for two bedroom, 65 square metre units; the medium to upper range such as in the Beacon Rock development, where two bedroom, two bathroom apartments are selling for R2.4 million for a 110 square metre unit; while at the top end of the market beachfront apartments sell for up to R20 million.

Says Schenk: “This year (2013) the residential property market continues to experience sustained demand and we anticipate the shortage of stock for sale and especially rental will become more evident. Positive news is that low mortgage rates are a major factor in attracting investors and first time buyers. The developments market is experiencing steady and ongoing demand, although buyers are more cautious and discerning, insisting on quality coupled with value for money.

“Having said that, over the past two years Pam Golding Properties has marketed PGA Park, 46 on Meridian and Bahia Club – all of which have sold out, as well as Beacon Rock, which is now 75 percent sold. The total market value of these four sectional title developments is in excess of R200 million, with prices ranging from R610 000 to R3.75 million. This year there are further new developments in the pipeline to cater for the ongoing demand. In addition to the positive factors mentioned, developers are prompted into action for a number of reasons. These include the ready availability of land around Gateway, a recognition that interest rates have bottomed – making capital relatively cheap, and competitive building costs arising from a depressed construction market,” adds Schenk.