In recent years, tougher economic and financial times for South Africa’s household sector have meant a greater focus on necessary expenditure items relative to “non-essentials”. For the housing market, this appears to have meant that housing demand for primary residential purposes has assumed greater significance than in the property boom years prior to 2008, whereas non-essential holiday property demand has been relatively speaking “on the backburner”. 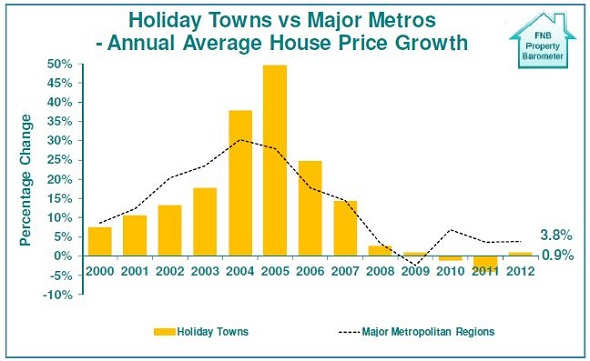 The FNB Estate Agent Survey, admittedly dominated by major city suburban estate agents, attempts to capture the relative trends between primary and secondary residential demand. According to this line of survey questioning, which started in 2007, when expressed as a percentage of total home buying the holiday buying component averaged around 2% in 2012. This was still significantly lower than the estimated 4% for 2007, but a bit higher than the lowly 1.5% recorded in 2010.

What has the mild improvement in holiday property demand in 2011 and 2012, compared with 2010, meant for the holiday town residential markets? Well, it doesn’t appear to have saved them from underperforming the highly primary residential demand-driven major metro markets, but by 2012 it did appear as though holiday town markets may have achieved some price stability after significant average price decline in 2010 and 2011.

FNB estimates average prices for SA’s 6 metropolitan council regions and for towns deemed to be highly holiday demand-driven, based on deeds office data for transactions by individuals in residential areas (Important to note is that this dataset is not quite comparable with the FNB National House Price Index, which runs of FNB-specific data).

The lagged impact of mildly improved holiday home demand, after the low of 2010, may therefore just have been sufficient to improve the market balance by 2012, and restore some price stability after a period of decline.

These holiday town markets are still expected to lag the major city markets in terms of price performance for the foreseeable future, as a result of still-significant economic and household sector financial weakness. In addition, many municipal rates and utility bills are rising steadily, making second homes significantly more costly to own and run.

So, it remains a long way from the days of 2004 to 2006, when holiday town house price growth was estimated to have outstripped major city price growth. But that’s the nature of these markets. They should be expected to be more cyclical than the cities due to the non-essential nature of holiday home demand. In addition, many of their economies can be more cyclical too, due to corporates often centralizing activities to larger centres in tougher economic times, as well as due to the cyclicality of tourism/getaway demand that often sustains such smaller town economies.

But nevertheless, while still lagging the cities, holiday town markets seem slightly happier places to be as some semblance of price stability appears to have been reached.