The conclusion of a R105 million finance agreement between Nedbank Corporate Property Finance and Amit Katz of Sunwood Capital will see the well-known SA brand, House of Busby, moving into a new 20 000m² premises in Gosforth Industrial Park, Johannesburg, towards the latter part of 2013. 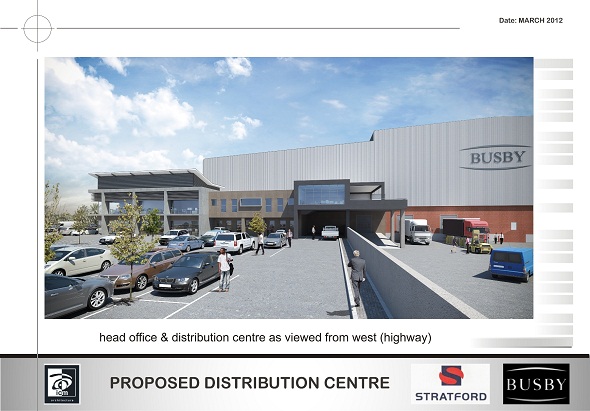 The loan covers the proposed development of a large warehouse, double storey office park and mezzanine area, plus yard space and parking area, to be occupied by sole tenant, House of Busby, which owns or manages a variety of established international brands, including Nine West, Mango, Guess and Forever New.

The new premises, which will be located in an upmarket industrial node with exposure to both the N12 and N3 freeway as well as Rand Airport, will also serve as a springboard from which House of Busby will roll out its latest retail undertaking in the form of a chain of standalone TopShop and TopMan stores – the well-known UK retail brands for which Busby and the Edcon Group have acquired local franchise rights.

According to Nedbank Corporate Property Finance Regional Executive, Ken Reynolds, the combination of a highly reputable tenant and a strong project team that includes Stratford Property Ventures as developers and project managers, resulted in the loan approval decision being a relatively easy one to make.

“Between them, Sunwood Capital and Stratford Property Ventures have an enviable track record of property development success and the contribution this warehouse and office building will make to the further growth of the dynamic industrial area in and around Gosforth Park aligns perfectly with Nedbank’s stated commitment to support developments that have the potential to facilitate South Africa’s economic growth and development.”

Reynolds also points to the fact that the development will form part of a new green precinct as resonating strongly with Nedbank’s own sustainability commitments as South Africa’s ‘green bank’.

“Nedbank has already established itself as a leading funder of sustainable commercial and industrial properties and in addition to being a key future industrial node in Gauteng, Gosforth Business Park has been developed with sustainability in mind.”

“The industrial park’s environmentally sustainable design includes water attenuation and recycling systems for all buildings, geothermal technologies to reduce energy usage for heating and cooling, and a centralised refuse area with full recycling capabilities, all of which significantly raise the appeal of the development as a future contributor to South Africa’s green economy.”