Year-on-year growth in the average value of homes in the middle segment of the South African housing market continued in January 2013. The upward trend in year-on-year price growth occurred against the background of the base effect of slowing house price growth and even price deflation in some segments twelve months ago. 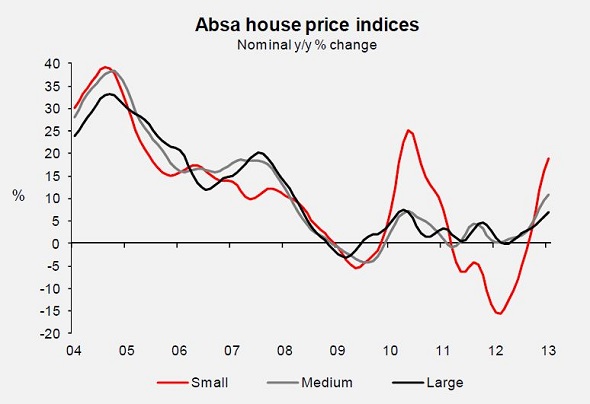 On a monthly basis, price growth continued to slow down, which is expected to show up in a moderation in annual price growth during the course of the year. These trends are according to the Absa house price indices, which are based on applications for mortgage finance received and approved by the bank in respect of middle-segment small, medium-sized and large homes.

Middle-segment house price growth came to 9,1% year-on-year (y/y) in January this year, after rising by a revised 7,4% y/y in December. Real price growth of 1,7% y/y was recorded in the last month of 2012, after real price deflation was recorded for most of last year.

The average nominal value of homes in each of the three middle-segment categories was as follows in January 2013:

The South African economy is in 2013 forecast to grow at rate of 2,8% in real terms, impacted by global growth of around 3,5% this year, while domestic economic and socio-economic developments and conditions will also be a major contributor to the country’s growth performance. Although headline consumer price inflation is projected to rise to above 6% in 2013, interest rates are forecast to remain low, which will be a reflection of macroeconomic trends in general and the possible impact of these and inflationary pressures on consumers.

Nominal house price growth is expected to remain in single digits in 2013, based on current trends in and the outlook for key macroeconomic indicators, household finances and consumer confidence. Real price growth will remain under pressure in view of consumer price inflation forecast to average around 6% this year.
View Full ABSA Report – Click Here