Global office real estate values and rents remained steady in the final quarter of 2012 (Q4 2012), according to CBRE Group, Inc. The CBRE Global Office Capital Value Index rose slightly with a gain of 0.6% for Q4 2012, while the CBRE Global Office Rent Index also edged up in Q4 2012, rising 0.3%.

“Considering the degree of uncertainty and caution permeating the global economy through the end of 2012, the performance of commercial real estate assets has been resilient. Fundamentals in absorption, occupancies and rents have seen gradual improvements while new supply is scarce, a dynamic which has maintained and improved the leasing market. Strong occupier and investor demand for prime space in the most desirable locations has played a significant role in the ongoing commercial real estate recovery as well.” 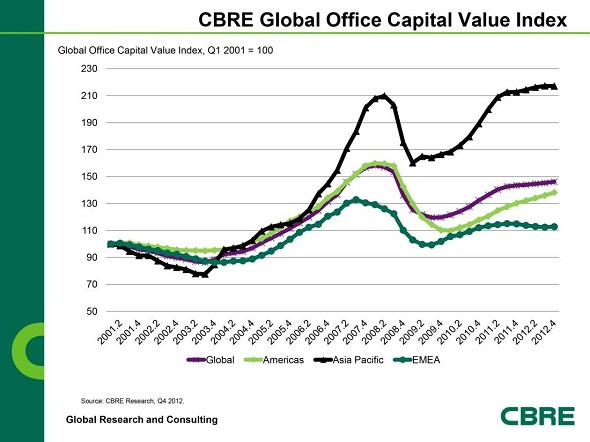 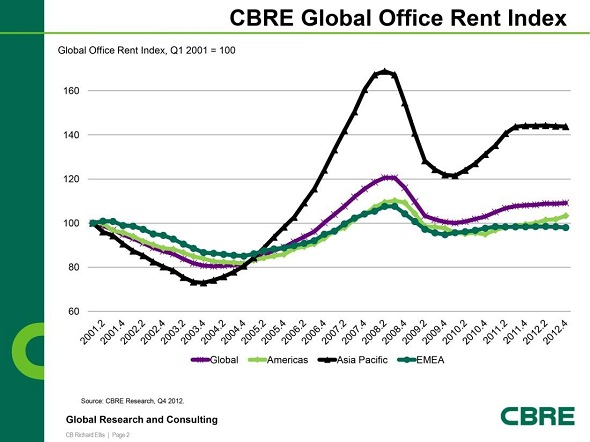 • The EMEA Office Rent Index declined slightly for a second consecutive quarter, by 35 bps in Q4 2012. EMEA’s Rent Index performance is clearly linked to the weak economic climate amid the ongoing European sovereign debt challenges. While the immediate threat of a eurozone break-up has subsided underlying structural changes and austerity programs are still to be formalised and implemented.
• The Asia Pacific’s Rent Index also fell for the second consecutive quarter, dropping by [14] bps in Q4 2012. 2012’s annual drop of 0.3% was the first annual decline since 2010. Leasing activity throughout Asia Pacific slowed substantially; with the exception of a select few markets such as Tokyo and Seoul where large volumes of new supply have prompted occupiers to upgrade to higher quality buildings.
• The Americas Office Rent Index rose by 1.6% in Q4 2012 and has risen 4.0% relative to Q4 2011. This performance reflects the slow, steady recovery across the region, particularly the US.
• In the U.S., technology, energy and healthcare industries have driven leasing demand across the South and West portions of the US, including energy markets such as Houston; technology markets such as San Francisco, Seattle, and San Jose; and healthcare/biotech markets such as Austin and Boston.

The CBRE Indices were created by CBRE Research. The Global Office Rent Index is comprised of data from 123 cities around the world. The Global Capital Value Index uses the same sample for EMEA and Asia Pacific, while the Americas data is derived from the National Council of Real Estate Investment Fiduciaries (NCREIF) and is not built up city by city the same way as is the rent index data. The base period for the indices is Q1 2001.