In January 2013, the FNB House Price Index continued its mild short term dip. From a revised year-on-year decline of -1.1% in December, the index declined further by -2.3% in January. 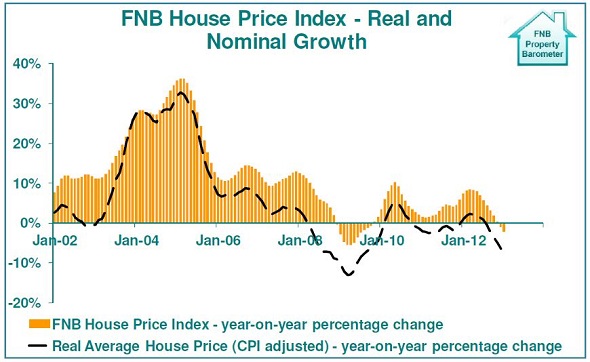 The causes are believed to be threefold:

Firstly, a high base effect has come into play, due to a healthy price growth surge early in 2012 as the residential market showed significant strengthening at that stage. This has a negative impact on the year-on-year growth rate a year later.

But thirdly, a considerable deterioration in economic growth in the 2nd half of 2012, after a relatively good 1st half. This was caused by a lull in global economic growth at the time, along with major output disruption locally due to widespread industrial action, especially in the mining sector. As such, it is believed that very little economic growth took place in the 4th quarter, after a dismal 1.2% annualized growth rate in the 3rd quarter. This was bound to slow growth in residential demand somewhat in the latter stages of 2012 as household disposable income growth slowed too. .. continued ..
..[View full FNB report here..]