European retail property investment activity jumped to €13.5 billion in the fourth quarter of 2012 (Q4 2012) – a 50% increase on the three-year quarterly average of €9.0 billion and an impressive 90% change from Q3 2012, according to the latest research by global property advisor CBRE Group, Inc. (CBRE). 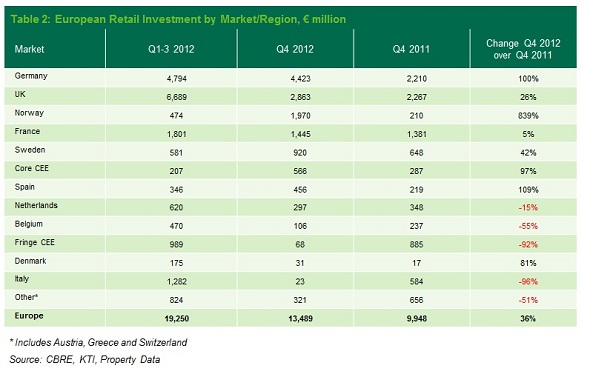 The latest results follow three relatively quiet quarters – when an average of €6.4 billion changed hands, largely due to a lack of core product. The strong Q4 2012 figures were heavily influenced by the “year-end effect”, which was more pronounced in the retail sector than in the overall European commercial real estate investment market. Q4 2012 European retail investment was up 36% compared with the same period in 2011.

Western European markets, especially Germany and the Nordics, attracted the majority of retail property investment in Q4 2012. In Norway, retail investment was substantially up on Q4 2011, pushing it into Europe’s top five largest retail investment markets in 2012. Germany is increasingly popular with international investors, with cross-border activity in the retail sector soaring to almost 60% in the second half of 2012. Stronger economic fundamentals, and local players taking advantage of favourable market conditions to sell, have benefitted these economies. Recent deals include the €500 million plus Kista Galleria in Stockholm; NIAM’s disposal of its 72.5% share in Sektor Gruppen, Norway; and the acquisition by Lone Star (a US private equity firm) of over €1 billion of assets in eastern Germany, a significant proportion of which was in retail.

Southern European economies, and those in the fringe of Central and Eastern Europe remained quiet, with significantly less activity than was the case a year or so ago. Against a strong rise in Q4 activity for Europe overall, it is clear that investors remain risk-averse and will retain their focus on core, benefiting the more robust economies at the expense of the weaker ones.

However, the Q4 2012 results unveil evidence of broadening investor demand towards better quality secondary assets in core markets, albeit primarily in Western Europe. These include non-prime properties in second-tier markets (especially the case in Germany), assets with significant vacancy levels, as well as increasing evidence of forward purchases of shopping centres in core Western Europe.

“The strong uptick in retail investment in Q4 2012 was probably more about closing deals that had been negotiated during the year than a positive change in investor sentiment. Generally speaking investors are still focused on the core markets of Northern and Western Europe, with very low investment volumes in Southern and Eastern Europe.”