The accompanying graph illustrates the problem facing Centurion. It shows how since 2009 the total stock of office space in Centurion has accelerated and headed north while demand for space (grades A and B combined) has basically moved sideways. Demand was calculated by subtracting the area available for leasing (vacant space) from the total rentable area (stock). The widening gap between the stock and demand (as seen in the graph) therefore represents the rise in vacant office space. This, in turn, would explain why prime office vacancy rates in Centurion jumped from 5% in 2009 to 18% in the fourth quarter of 2012. 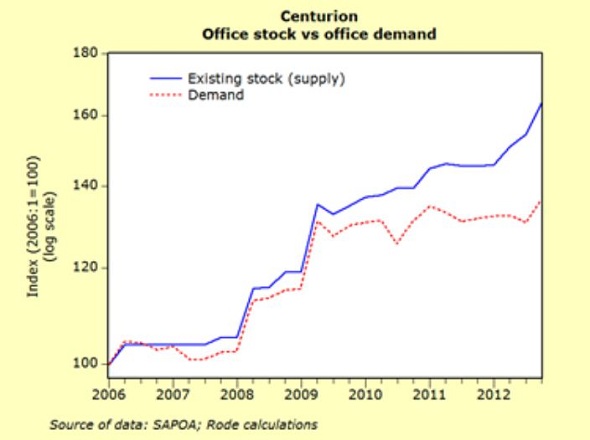 The second graph shows the total rentable area of committed new office developments as well as the percentage of this space that was unlet. Even though the period between 2010 and 2012 was marked by weak economic activity (a harbinger of lacklustre demand and take-up of office space) new office developments still trended north during this period. Worrisome for the Centurion office market must be the seemingly speculative nature of these developments. As at the fourth quarter of 2012, about 48.000m² of committed space — of which 86% was unlet at the time — was still in the pipeline. This is not good news for an office node currently sitting with a combined grade A & B office vacancy rate of 18%, which in itself does not bode well for market rentals in Centurion. 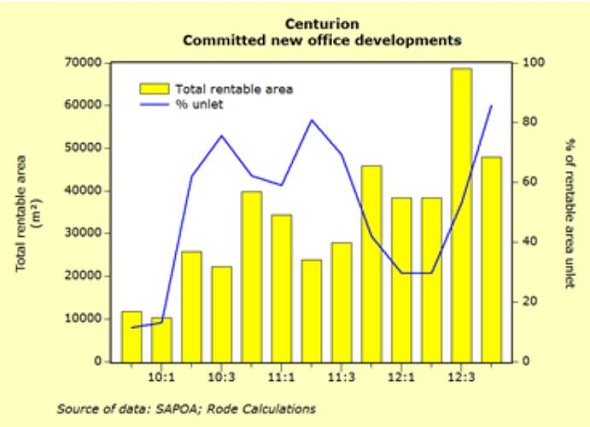 So here’s the deal: Rode is offering new subscribers a once-off special on our authoritative Rode’s Report on the SA Property Market – both the print and online versions – at a 10% discount, provided you order and pay before end of February 2013.