“The year 2013 will mark the coming of age of alternative building technologies (ABTs) on the Southern African construction landscape – and the urgent need for housing and associated infrastructure delivery will be its main driver.” 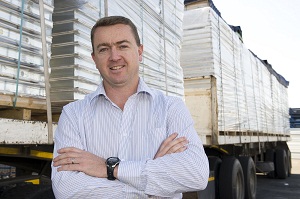 Brent Harris with a consignment of Modular panels about to be road-hauled to Angola.

This is the view of Brent Harris, a civil engineer and one of the pioneers and innovators behind the development of modern-day ABTs in South Africa as a cost, time and skills efficient alternative to conventional building materials and methods.

“All the fundamentals are in place for a watershed year for ABTs which, I believe, is set to become one of the growth industries of the decade,” says Brent, who is the founder and CEO of Gauteng-based Vela Building Solutions, Africa’s leading manufacturer and supplier of ABTs products and systems.

He bases this view on a number of key factors, which include

“There is no way that this magnitude of infrastructural rollout can be achieved by way of conventional (bricks and mortar) construction alone – not least because if the huge pool of skills that would be needed to make it happen,” says Brent.

“The biggest issue with using traditional construction methods is that there is too much reliance on the skills of the builder – in a labour environment in which skilled workers are in short supply.

ABTs-based construction circumvents that problem because the elementary skills required can be quickly taught on site,” says Brent.

Vela Building Solutions last year doubled its production capacity to cater for existing and anticipated demand in South Africa and sub-Sahara for its home-grown range of ABTs products and systems.

At the same time, the company established local operations in Mozambique and Namibia, and reinforced its deep market footholds in Angola, the Democratic Republic of Congo (DRC), and Zambia.