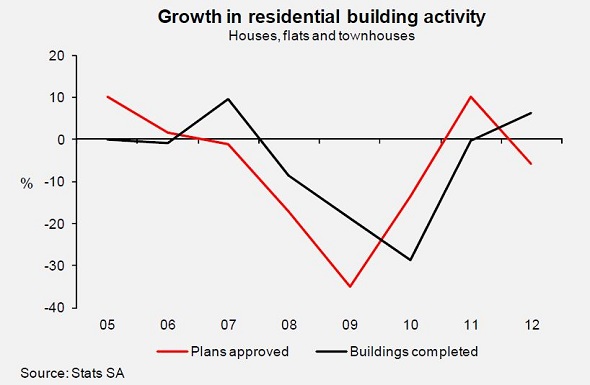 The number of new housing units for which building plans were approved was down by almost 6% in 2012, mainly as a result of a contraction of more than 21% in the planning phase of houses smaller than 80m². The category for houses of 80m² and larger as well as flats and townhouses showed some improvement in terms of plans approved, but the growth in these segments remained well in single digits. The real value of plans approved for new residential buildings amounted to R15,52 billion in 2012, up by only R326,58 million, or 2,1%, from R15,19 billion in 2011. In the period of 1994 to 2012, plans were approved for a total of 1 457 847 new private sector-financed housing units, of which 1 020 713 units, or 70%, were in the segments of smaller-sized houses and higher-density flats and townhouses. These numbers exclude government-financed and government-subsidised housing.

The construction phase of new housing recorded an increase of just more than 6% in the level of activity in 2012 compared with 2011, which is a lagged effect of an improvement in the planning phase in 2011. The growth in construction volumes last year was mainly the result of an increase of 20% in the number of flats and townhouse units completed, which came on the back of 20% growth in the level of plans approved for these types of housing in the previous year. The real value of new residential buildings completed was up by R1,14 billion, or 11,1%, to a level of R11,40 billion in 2012 from R10,26 billion in 2011.From 1994 to 2012, a total number of 1 084 381 private sector-financed new housing units were built, of which 73,4%, or 795 273 units, were houses of less than 80m² and flats and townhouses.

Residential building activity will in 2013 continue to be affected by economic trends, household finances, property investment sentiment with regard to buy-to-let properties, and consumer confidence in general. These factors, together with trends in building costs and lifestyle, are expected to be reflected in the future demand for and supply of new housing, which will also be affected by activity in the secondary property market. Housing affordability is set to remain an important factor in view of households’ financial position, property prices, transaction costs and property running costs. As a result, it is expected that the focus of the majority of homebuyers in the South African market will largely remain on the segments for smaller-sized houses and higher-density flats and townhouses, as reflected by the above-mentioned trends in residential building activity since the mid-1990s.