Expect the topic of household sector indebtedness to be a key theme in 2013. Over the years, perhaps fueled by the consumer boom of last decade, we have seen a seemingly increasing obsession amongst many households over consumption and credit. This seems to be a common phenomenon in societies where things have gone well for long periods of time, and it can be argued that middle and upper income South Africa has “had it good” for a very long time, with no major wars, recessions or depressions (the 2008/9 recession being relatively short-lived when one compares it to for instance the early-1990s recession of over 2 years). 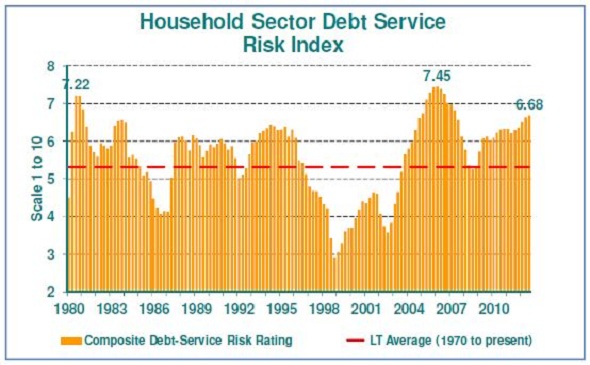 But even the relatively recent 2008/9 3-quarter long recession, and the interest rate peak of 15.5% prime rate in 2008, is fading in the memory of many. A long period of
“abnormally low” interest rates by South Africa’s standards has led to a major
improvement in household debt repayment performance, and this can be seen in large
declines in numbers such as total insolvencies. Home loans bankers, for one, sleep a lot easier at night these days, with non-performing loans well down from the highs of
2008/9. And in the area of non-mortgage household sector credit, the growth in
borrowing has steadily accelerated since early-2010 in response to renewed happier
economic and interest rate times.

But “all is not well”. If low interest rates lead to improved repayment performance this does not mean that the underlying household financial frailties no longer exist.
Increasingly, certain commentators are expressing alarm at the huge growth rates in
certain categories of household credit. Total household sector credit growth moved to
above 10% as at November, the 1st month of double-digit year-on-year growth since late-
2008.

But the discussion broadened late last year. Whereas the debate had typically focused on what the level of bad debt could become should household indebtedness get too high, allegations emerged that high levels of indebtedness maybe linked in part to social unrest. [Read More in the Full FNB Report]