November 2012 saw residential building activity in the South African market for new housing improving compared with a year ago. Levels of activity increased in both the planning and construction phases of new housing in the penultimate month of last year. 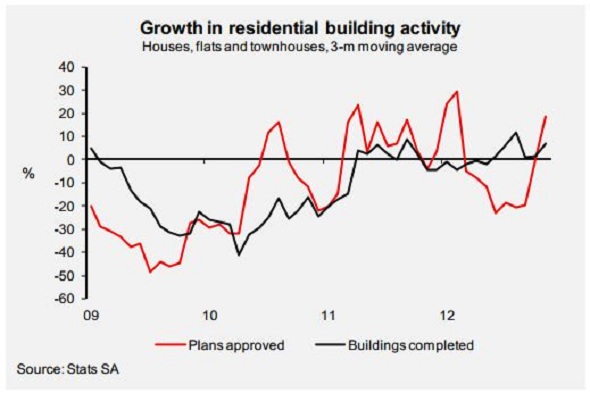 The number of new housing units for which building plans were approved, increased by 764 units to 5 439 units in November last year from 4 675 units in November 2011, which translated into growth of 16,3% y/y. The November 2012 figure was 1 897 units, or 53,6%, more than the number for which plans were approved in April last year. The segment for flats and townhouses was mainly responsible for the growth in the planning phase late last year, showing growth of 116,2% y/y in the number of units for which plans were approved in the period of September to November. This will positively impact the construction of higher-density housing in 2013.

In the construction phase of new housing, the number of units completed increased by 920, or 24,7% y/y, to a total of 4 641 units in November last year from 3 721 units a year ago. All three segments of housing contributed to this increase.

The demand for and supply of new housing, as reflected by levels of activity with regard to building plans approved and housing units completed, will continue to be driven by economic developments, property investment sentiment, and trends in and the state of household finances.